Foreign earnings up €400 million, marking biggest increase in a decade 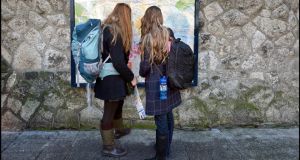 Visitor numbers have rebounded and have now returned to pre-recession levels, according to Fáilte Ireland. Photograph: Brenda Fitzsimons/The Irish Times

Dublin will need more hotels to cope with the expected increase in visitor numbers next year, Fáilte Ireland chairman Michael Cawley has said.

During the recession, the tourism industry complained of too many hotels and not enough customers but Mr Cawley said it was well known there was now a shortage of hotel rooms in the centre of Dublin and the best solution was to increase bed numbers.

Visitor numbers increased by an estimated 9 per cent this year and are expected to increase by 6 per cent in 2015. Mr Cawley said hotels were needed in all segments of the market. “I’m aware of at least one (hotel) being built.”

He said the Irish tourism sector had made huge improvements when it came to offering value for money but a shortage of hotels in the capital could undo some of this work by sending prices spiralling before more rooms become available,

“We would exhort people not to be exorbitantly pricing in the meantime,” he said. He added that businesses should take a long-term view and try to send tourists home who enjoyed good value with accommodation, food and places they visited.

Mr Cawley said the capital had shown growth in tourism in the last year, “principally because access has gone up, and we still get very positive stories about Dublin but . . . It needs to be developed further. It needs to be pushed out from the centre.”

He said cities such as Edinburgh, Amsterdam and Copenhagen had managed to encourage tourists to explore more than the city centre. “The Dublin tourism effort is very concentrated in the centre,” he said. Mr Cawley noted the Dalkey Book Festival as an initiative that could be reproduced in other Dublin suburbs.

He was speaking at the publication of Fáilte Ireland’s annual tourism industry review. It estimated the 7.3 million tourists who came here this year had increased foreign earnings by €400 million. This was the biggest increase in a decade, according to chief executive Shaun Quinn.

Visitor numbers are now back to pre-recession levels and are on a par with 2008, which was the second-best year to date. We Irish also took more holidays at home and spent more this year. Moreover, trips we took increased by an estimated 6 per cent and spending also rose by 6 per cent, to €1.5 billion.

Tourism: by the numbers:

Unemployment rate remains at near record 26.1% in May 11:52
Bank of England tells banks to get ready for no-deal Brexit 11:11
More than 2m people use website that shows lockdown distance limits 10:35
Angela Merkel sweeps in to save the euro zone 10:32
Google facing $5bn lawsuit for tracking in ‘private’ mode 09:51

1 In six months we will be in the grip of a 1980s-style recession
2 Angela Merkel sweeps in to save the euro zone
3 Aer Lingus wants quarantine period axed to resume flights in July
4 Google facing $5bn lawsuit for tracking in ‘private’ mode
5 Deloitte expands into cloud computing with deal for DNM
6 More than 2m people use website that shows lockdown distance limits
7 Bank of England tells banks to get ready for no-deal Brexit
8 Pinterest seeks new office for Dublin EMEA headquarters expansion
9 Should my mam wait for house prices to drop before buying?
10 Unemployment rate remains at near record 26.1% in May
Real news has value SUBSCRIBE