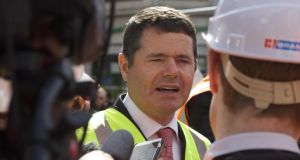 Minister for Transport Paschal Donohoe is close to deciding whether to approve plans for a rail line connecting central Dublin with the city’s airport.

The National Transport Authority (NTA) has drawn up a shortlist of six options, including a Luas line or a revamped version of the controversial Metro North plan, for connecting the city with the airport and north Dublin suburbs.

Mr Donohoe said yesterday he expected to decide on the overall capital plan “soon” but would not be drawn on a deadline. Any recommendation he makes would have to go to Cabinet first.

The NTA’s shortlist includes a connection from the Luas cross-city line, which is now being built, and an amended Metro North, both of which would involve tunnelling under parts of Dublin. Spurs from existing rail lines and rapid bus transit also feature on the list.

The minister was speaking at Ryanair’s launch of its 2016 summer schedule for Dublin Airport, which the airline said would feature 83 routes, a new service to Amsterdam and increased numbers of flights to 14 existing destinations.

Chief marketing officer Kenny Jacobs predicted the schedule would result in 11.75 million passengers travelling through Dublin Airport, who will in turn support 8,800 jobs at the hub.

Ryanair chief commercial officer David O’Brien noted the airline was “relaxed” about any plans for a rail service connecting the capital with its airport, “if the airlines are not required to fund it”.

He also said that the company supported proposals for a new runway, for which Dublin Airport Authority (DAA) already has planning permission. However, he warned it would not back any project that involves cost overruns similar to those he said resulted in a €1.2 billion bill for the hub’s second terminal.

“In my view the regime at Dublin Airport is taking a different approach to the previous approach of spending so much on capital projects,” he said.

“We are supportive of a new runway provided it costs less than €200 million.”

DAA has always contested claims that terminal two cost €1.2 billion to build. Instead it has pointed out that this figure includes the bill for a range of projects at the airport, including a revamp of Pier D, which it maintained allowed Ryanair to expand there.

The Commission for Aviation Regulation would allow Dublin Airport to increase passenger charges beyond current limits laid down last year should it build the new runway.