Cabin crew strikes cause disruption to and from Dusseldorf, Frankfurt and Munich 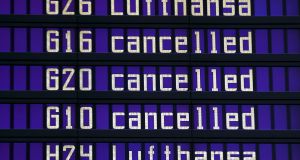 All-day strikes by Lufthansa cabin crew at three German airports has lead to the cancellation of some flights to and from Dublin Airport on Monday.

Those travelling to or departing from Dusseldorf, Frankfurt or Munich may see their flights cancelled as workers for the German airline continue industrial action amid a dispute over cost cuts.

Lufthansa said some 113,000 passengers will be affected by the action over all.

The UFO union has called on all members to walk out from 4.30am to 11pm local time (3.30am to 10pm) in Frankfurt and Dusseldorf and until midnight (11pm GMT) in Munich.

UFO began the strike action on Friday and it is expected to continue for a week, rotating around different airports, though it took a break on Sunday.

The union wants to secure transition payments for its 19,000 members if they retire early as part of its contract dispute with Lufthansa, which is trying to cut costs.

The strikes will not affect Lufthansa subsidiaries such as Eurowings, Germanwings, Swiss and Austrian Airlines.