Tourism board to encourage low cost carriers to fly from UK 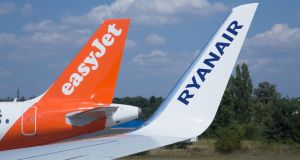 Kenya plans discussions with low-cost airlines such as Ryanair and EasyJet to begin flying to the East African nation famous for its beaches and safaris, its tourism minister said.

Tourism is one of the country’s biggest generators of foreign exchange after remittances and agricultural exports, and earned the nation 119.9 billion shillings (€1 billion) last year, according to the Kenya Tourism Board.

“We are developing a strategy to encourage low-cost carriers from the UK to fly here,” Najib Balala said in an interview in the Indian Ocean city of Mombasa on Tuesday. “I will be looking to start discussions with Ryanair and easyJet.”

Mombasa’s airport is the country’s second-biggest after Nairobi’s, with many tourists seeking the region’s sun and sand. Kenya is also famed for its wildlife.

The UK, a hub for both carriers, is Kenya’s biggest source of tourists so far this year after the US, Mr Balala said, followed by India, China and Germany. As many as 16 per cent of arrivals are now from other African countries, he said.

Kenya expects visitor numbers to climb by 18 percent this year, boosted by improved security, infrastructure such as a new railway and global hotel brands expanding there, Balala said. In 2017, the number of arrivals grew 10 per cent to almost 1 million tourists, according to the Kenya National Bureau of Statistics.

Kenya Airways, sub-Saharan Africa’s third-biggest, will introduce direct flights to US later next month, and plans to add as many as 20 new destinations in the next five years. – Bloomberg