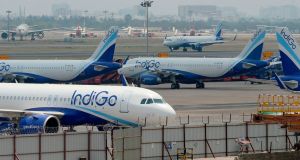 A Indigo aircraft approaches to take off from Anna International Airport after the government eased a nationwide lockdown imposed as a preventive measure against the COVID-19 coronavirus, in Chennai on May 24th. Domestic air travel will resume in India on Monday. Photograph: ARUN SANKAR/AFP via Getty Images

The president of India’s largest private airline IndiGo has warned that government intervention to set fares threatens to undermine the restarting of flights after two months of grounding because of the pandemic.

Wolfgang Prock-Schauer, president and chief operating officer of IndiGo, said in an interview with the Financial Times that he was not in favour of the price band - with an upper and lower limit - imposed by New Delhi on flights until August. “We were not asking for that,” said Mr Prock-Schauer,

“As a matter of principle, we think airlines should be smart enough to do it on their own; let the market forces work.”

Analysts said the regulation would hit demand in the world’s fastest-growing aviation market and put pressure on an industry already struggling with the impact of the country’s strict lockdown.

“Price caps, even though temporary, set a very bad precedent,” said Kapil Kaul, south Asia chief at the Centre for Asia Pacific Aviation. “The world over, companies are trying to reduce fares to attract people to come back. We have done the opposite.”

New Delhi’s unexpected announcement last week that domestic flights would resume on Monday at reduced capacity has unleashed chaos in the industry, which had been preparing to restart at the end of the lockdown on May 31st.

Many states have also objected to restarting flights, or have proposed putting travellers into quarantine, complicating efforts to resume operations.

States such as Maharashtra, home to the financial capital of Mumbai, initially resisted allowing flights as it battles to contain a surge in Covid-19 infections.

Other states, including Karnataka where the country’s tech hub of Bangalore is located, have proposed quarantining travellers.

“There will be some clarifications, we hope,” said Mr Prock-Schauer of the government’s measures. “Transparency is very important for the restart of operations.”

Despite the challenges, Mr Prock-Schauer said IndiGo was ready to return to the skies, and planned to deploy its 257-strong Airbus and ATR fleet at one-third capacity, per government rules.

While the company’s cash reserves mean it is better positioned than rivals to handle the disruption, it has still had to cut salaries and ask staff to take unpaid leave.

But Mr Prock-Schauer said he was “optimistic” about demand returning, dismissing forecasts that say it could take up to three years to get back to normal.

The government of India’s prime minister Narendra Modi is trying kick-start the economy even as Covid-19 cases surge nationwide. The country of almost 1.4 billion people has more than 131,000 confirmed infections and has recorded more than 3,800 deaths so far.

“Chaotic is the mildest word you can use,” said Neelam Mathews, aviation analyst in New Delhi, about the resumption of flights. “We don’t even know if the flights are going to take off.”

Carriers would also be hit if the Supreme Court rules that passengers should be given cash refunds instead of credits for cancelled tickets. Mr Kaul said this could cost the industry up to $500m.

EU court to rule on the Apple state aid case 06:24
Aviva Irish general insurance chief executive sues employer 06:00
Transatlantic data transfers once again in the dock 06:00
‘It’s been quite easy’: Insights from the heart of the remote working revolution 05:37
Osmo is a home-school hero – an app that educates and distracts 05:06

1 ‘It’s been quite easy’: Insights from the heart of the remote working revolution
2 Aviva Irish general insurance chief executive sues employer
3 Transatlantic data transfers once again in the dock
4 FC Barcelona to pursue Nike for compensation over defective shirts
5 Spar-owner BWG explores potential for online shopping ‘pot of gold’
6 What is Covid Tracker Ireland?
7 Osmo is a home-school hero – an app that educates and distracts
8 Key Dublin docklands site primed for €100m sale
9 Denmark’s answer to Ikea signs deal for first Dublin outlet
10 Why gift a son now if it eats into his tax-free inheritance threshold?
Real news has value SUBSCRIBE