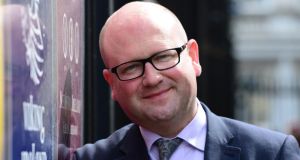 Hotel operators have said that the re-introduction of wage -setting mechansims inthe sector to determine pay and conditions for staff would jeopardise job creation and introduce “counterproductive inefficiencies”.

On Thursday the Minister for Business and Employment Ged Nash strongly criticised hotel employers, who availed of tax benefits provided by the Government but who were now boycotting new structures , revised joint labour committees , put in place to determine pay and conditions in the sector.

He said some hotels “believe they can staff their hotels and decide on rates of pay without recourse to negotiation, because they think unions do not have the numbers to prevent them”.

It stated that its reintroduction would jeopardise job creation by imposing additional costs on the sector at a time when payroll was already the largest element of costs for hotels, accounting for over 40 percent of turnover.

“They have lost all relevance since the introduction of the National Minimum Wage Act, which has provided Ireland with one of the highest gross minimum wage rates in Europe and goes hand in hand with over 40 other separate pieces of extensive employment legislation including the Working Time Directive. “

The trade union Siptu, however, strongly supported the Minister’s criticism of hotel employers.

Siptu services division organiser, John King said the union had repeatedly called on the Government “to act and remove the effective veto” which the hotel employers had over a system which aimed “merely to ensure that workers receive a fair day’s pay for a fair day’s work”.

“It is just unacceptable that employers who are benefitting from a reduced VAT rate for their industry and hundreds of millions of taxpayers money spent on promoting it, can then cherry pick what other aspects of Government policy they wish to adhere to.

“This situation needs to be tackled now, otherwise the Government’s entire strategy on protecting low paid workers is fatally undermined.”

Mr Nash said it would only be determined in time “ if these employers are right, and for how long”.

He said the order introduced by Minister for Jobs Richard Bruton establishing the joint labour committee in the hotel sector was signed on foot of a statutory recommendation would “promote harmonious relations between workers and employers and assist in the avoidance of industrial unrest”.

Mr Nash said that swapping the “relative predictability” of this process for the risks of an “enterprise level free-for-all” was a regressive step. However he said the Government could not coerce employers to negotiate.

“It seems we may be returning to ‘war-war’ rather than ‘jaw-jaw’. The unions may derive some benefit from the improved collective bargaining legislation we will introduce later this year. “

“But a major challenge and opportunity the unions face is to prove their relevance to unorganised or poorly organised sectors of the workforce and to recruit members in sufficient numbers to give teeth to their demands that employers sit down with them at the negotiation table.”

In a wide-ranging speech on Thursday Mr Nash also said that employers and trade unions might be surprised at the depth of hostility amongst public representatives of all parties to a return to full-blown social partnership.

The Minister, however , backed the establishment of some form of social dialogue between the Government, unions and employers.

He said a return to social partnership “as we previously knew it” would be “over hasty”.

Mr Nash pointed to some “institutional deficits” in the existing relationships including the absence of a trouble-shooting body of last resort where employers, unions and the Government could address labour market issues and disputes.

In his address atan event hosted by the employer’s group Ibec, Mr Nash also argued that the proposed “living wage” - which would be set a a higher rate than the national minimum wage could only be introduced on a voluntary basis.

The minimum wage stands at €8.65 an hour but members of the Government have signalled it is likely to be raised in the months ahead. Last weekend the president of Siptu, Jack O’Connor, urged the introduction of a higher “living wage” of €11.45 an hour.

1 Columbia Sportswear defies gloom with first Irish standalone shop
2 Restaurants file court actions against insurers over lockdown losses
3 Ireland faces 'deep downturn' this year and may not rebound until 2024 if there is a second wave
4 ‘The rental situation stops me moving back home’
5 How to further divide the economy using the wage subsidy
6 Second Covid-19 outbreak and no-deal Brexit an appalling vista
7 Could your old car be giving away all your secrets to its new owner?
8 High Court appoints interim examiner to Compu b parent company
9 David McCullagh announced as co-host of RTÉ Six One News
10 Home or car: what’s the best use of my savings?
Real news has value SUBSCRIBE