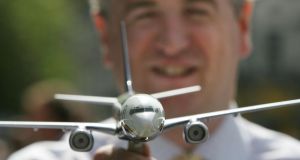 Former Ryanair deputy chief executive and financial officer Howard Millar has been appointed to the advisory board of Dublin-based Irelandia Aviation.

Irelandia, which is led by Declan Ryan - son of Ryanair founder Tony Ryan, specialises in developing low-cost airlines based on the Ryanair model.

Mr Millar was Ryanair financial officer and deputy chief executive until October of this year.

He will step down as a full-time executive at Ryanair this month, and will join the board of Ryanair as a non-executive director in mid 2015.

Mr Howard is an aviation industry veteran having worked at Ryanair for almost 23 years.

“Howard was a pivotal figure in the transformation of Ryanair from a small loss making regional carrier to Europe’s largest and most profitable airline,” a statement released on behalf of the airline said.

Irelandia’s Viva airline brand is embarking on a major expansion drive in Central and South America.

The new entity will oversee the expansion of the Viva brand beyond its current operations. The group, which is jointly owned with Mexican bus company IAMSA, dramatically pulled its planned €165 million flotation of Mexico’s VivaAerobus earlier this year, citing emerging market volatility.