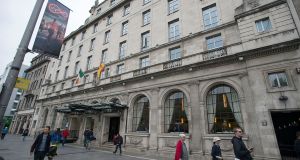 The court heard The Gresham had settled matters with the electrical company and was now seeking payment from Clive Byrne. Photograph: Dave Meehan

A maintenance manager has been ordered by a judge to repay The Gresham Hotel, his former employer, a debt of €42,000 after having ordered goods for personal use from an electrical company which had been engaged in contract work for the hotel.

Mr Andrew Walker, counsel for The Gresham in Dublin’s Upper O’ Connell Street, told Circuit Court president, Mr Justice Raymond Groarke on Wednesday that Clive Byrne had billed the hotel for items ordered from an electrical company and had collected them himself or had them delivered to his home.

Mr Walker said The Gresham had a contract with N2 Electrical and Security Supplies Limited of Rath Cross, Ashbourne, Co Meath, and had been billed for items that had not been related to it.

He said it had come to light that Mr Byrne had been billing the hotel, his then employer, for items ordered from the electrical company but had collected them in person or had them delivered to his own residence.

Mr Walker, who appeared with Holmes O’Malley Sexton Solicitors, told the court that certain goods had been recovered from Mr Byrne by the Garda who had been instructed by The Gresham to pass on the goods to donate to charity.

The court heard that Mr Byrne, of the Pines, Fairyhouse Road, Ratoath, Co Meath, had ordered almost €92,000 worth of electronic goods under the hotel’s name including domestic fridges among other items.

Mr Walker said N2 Electrical and Security Supplies Limited had sued the hotel and Mr Byrne for the recovery of €41,936.94. The Gresham had settled matters with the electrical company and was now seeking payment from Mr Byrne.

Mr Byrne appeared before the court and told Judge Groarke that he had no issue with paying the €42,000 to The Gresham Hotel. He said he was very sorry for his actions, of which he was not proud.

He said he had been dealing with personal issues and addiction at the time and was not going to lie to the court about his actions. “It is what it is,” he said.

Judge Groarke ordered Mr Byrne to pay The Gresham a total sum of €41,936.94 along with the legal costs of the action.

1 Player Wills site: Hines and APG to seek permission for 416 homes
2 Eir sells share capital of Emerald Tower for €300m
3 Developer O’Flynn calls for task force to deal with housing crisis
4 Pilita Clark: A lot of us are losing it in lockdown – but we really shouldn’t
5 Consumer spending fall may cut indirect tax revenues by up to €6.7bn
6 EU divisions laid bare by ‘frugal four’ Covid recovery proposal
7 Lobbyists Zoom in to get their message across to Ministers
8 Ryanair on hook for €1bn in passenger refunds due to Covid-19
9 Pricewatch: Coronavirus has given us four categories of shopper
10 Will remote working mean an end for the corporate HQ?
Real news has value SUBSCRIBE