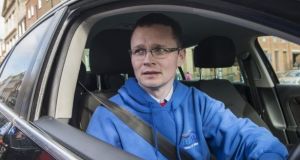 Patrick O’Donovan said issue was close to his heart as an information office was closed in his constituency. File photograph: Brenda Fitzsimons/The Irish Times

Fáilte Ireland has defended its decision to close its tourist information desk at Dublin Airport as most queries relate to airport information and transport location, rather than tourism.

The contract at terminal two ends in June and the tourism authority has decided not to renew, in the wake of changing visitor behaviour.

The terminal one desk at the airport closed last year and was replaced with a Dublin Bus transport and travel advice centre. Once the move is implemented no airport will have a Fáilte Ireland tourist information desk.

Concerns about the decision have been raised in the Dáil by Independents4Change TD Clare Daly who said “it seems bizarre that no tourist office is to be located there” when the summer tourism season gets underway.

Ms Daly, in whose Dublin Fingal constituency Dublin Airport is located, said the facilities were “such a vital linchpin in smoothing the passage of passengers through the airport and made their welcome in Ireland very much céad míle fáilte”.

Minister of State for Tourism Patrick O’Donovan is to raise the issue this week with Fáilte Ireland’s chief executive to establish its rationale.

Mr O’Donovan said the issue was close to his heart because a tourist information office was closed in Adare in his Limerick constituency.

The tourism authority said however that the nature of the activity in the airport was low level and that greater use of its limited staff resources could be had by providing more assistance to tourists at other tourist information offices.

Fáilte Ireland’s head of visitor services Gary Breen said “while callers to our tourist office in the airport may seek airport information as they pass on through, there is a greater level of engagement with visitors to our city offices regarding activities and in-country destinations”.

Mr Breen added that this was where they could have the greatest effect on visitor decision making to “ensure our guests fully maximise their enjoyment of an Irish holiday”.

Ms Daly also claimed a “Dublin-centric organisation is being developed around Fáilte Ireland which is inherently dangerous” and that 13 staff would have to move to Dublin city centre in June.

He said Fáilte Ireland had 28 tourist offices around the State and there were also more than 40 offices operating on a voluntary basis.

The Dublin Airport desk is staffed for 80 hours a week and Fáilte Ireland said it has limited resources with 23 per cent less staff than in 2010. It made much more sense and better use of taxpayers’ money to locate its personnel in other tourist offices where their services were most needed, Fáilte Ireland said.