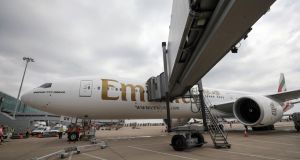 Some 223,342 people took Emirates flights from Dublin to Dubai and on to other destinations in 2018. Photograph: Chris Ratcliffe/Bloomberg via Getty Images

Dubai-based Emirates carried more than 442,000 passengers on its Dublin to Dubai route last year, an increase of 2 per cent, and transported close to 10,000 tonnes of Irish exports during 2018.

The airline, which started its Dublin route in 2012, operates two flights daily from and into Dublin. Some 223,342 people flew from Dublin to Dubai and on to destinations such as Australia, New Zealand, South Africa, Thailand, Vietnam and Japan.

“We carried more than 219,000 passengers into Ireland from around the world, via Dubai, and this figure includes international tourists, business passengers and of course, those returning from holiday,” said Enda Corneille, Emirates country manager for Ireland.

The numbers are a small proportion of the 59 million passengers Emirates carried globally last year, with 3,700 flights every week resulting in a total of 192,000 over the year.

The Boeing 777s that Emirates uses on the Irish route are capable of carrying 360 passengers and 25 tonnes of cargo. Among the 10,000 tonnes of cargo carried over the year by freight division SkyCargo were food items such as crabs, oysters, razor shells and salmon, yoghurts, cheese, beef, chocolates and baby milk formula. Food accounted for 35 per cent of Irish cargo, with pharmaceuticals accounting for more than 20 per cent.

The airline also carries a number of Irish products on board for passengers, including Voya skincare products, Butlers chocolates, Killowen yoghurt, Keogh’s Crisps and Gahan beef. Its most popular onboard meal – fillet steak, which is served in first class and business class – is served with sautéed vegetables sourced from Irish suppliers.

However, wine on board is a different story, with Irish customers usually opting for a French red or New Zealand sauvignon blanc. Emirates has its own wine cellar in Burgundy, France, that holds seven million bottles of wine.

An estimated 5.5 million bottles of wine and champagne were consumed on Emirates flights last year.

1 Should my mam wait for house prices to drop before buying?
2 Hard-hit SMEs get ‘paltry’ €11m worth of loans under State scheme
3 Pilita Clark: Why we’re about to learn if we are really in the A-team
4 Chris Johns: Past is another country when it comes to our post-pandemic future
5 Irish whiskey sales near milestone of 12m cases a year
6 US ‘hard seltzer’ drink White Claw launches in Ireland
7 Michael Smurfit: ‘I asked Trump to invite me to the White House for my 80th birthday’
8 Citigroup warns that markets are out of step with reality
9 ‘I have a talent for justifying purchases’
10 Joint accounts: if one of us dies, can the other access the money?
Real news has value SUBSCRIBE