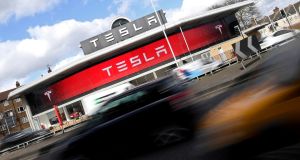 Tesla said it delivered a record 25,418 vehicles in the quarter ended March

Tesla’s shares jumped to an all-time high on Monday as the electric car maker’s record quarterly vehicle deliveries allayed some concerns over its production challenges, ahead of the hotly-awaited launch of its Model 3 sedan.

Tesla’s stock climbed as much as 5.7 per cent to $294.15, giving it a market capitalisation of $47.92 billion – higher than Ford Motor’s $46.27 billion value and just below General Motor’s value of $48 billion, at their Monday session highs.

Tesla said on Sunday it delivered a record 25,418 vehicles in the quarter ended March, a 69 per cent increase from last year and edging past Goldman Sachs’ forecast of 23,500 vehicles.

“This beat shows that they are managing production better and that it bodes well for the Model 3 to be on time as well,” said Ivan Feinseth, director of research at Tigress Financial Partners.

That and other setbacks had led investors and suppliers to predict that Model 3 volume production would be delayed until 2018.

But chief executive Elon Musk reassured investors in February that the Model 3 was on track for volume production by September this year.

The Model 3, a midsize mass-market sedan, had about 373,000 advance reservations as of April last year, and is expected to go on sale later this year in the United States.

“(Tesla has) had a pattern of missing their targets and the fact that they were able to meet the delivery target this quarter should be warmly received by investors,” said CFRA analyst Efraim Levy. “It’s good news for Tesla, clearly.”

1 Who are Ireland’s 17 billionaires?
2 Are there annual limits on inheritances or gifts to a child?
3 My father in a nursing home wants to gift me his house
4 State subsidises public sector retirees to cover gap until State pension
5 Avolon executives share €27m in pay as revenues soar
6 Q&A: Why has the pension age question suddenly become an election issue?
7 Dublin office vacancy rate hits lowest level in 20 years
8 Profits rise at JPMorgan Chase and Citigroup but slump at Wells Fargo
9 Shell counting the cost as sale of Corrib gas field completed
10 Irish tech firm SoapBox chosen for $30m US child literacy project
Real news has value SUBSCRIBE