Norwegian Air’s ticket sales to the US ‘surprisingly good’ 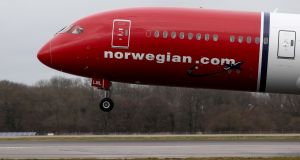 Norwegian Air has begun regular flights from Ireland to the US. Photograph: Simon Dawson/Bloomberg

Norwegian Air said bookings from Europe to the United States were surprisingly good and that the firm had yet to see a see negative impact from the US administration attempts at imposing travel bans.

“Bookings to the US are very good, surprisingly good,” chief executive Bjoern Kjos said in an interview on the sidelines of a conference.

“We have not seen it (a negative impact of the ban attempts). That is probably because we do not fly (directly) from the countries affected.”