Cork to New York route still under consideration by Norwegian 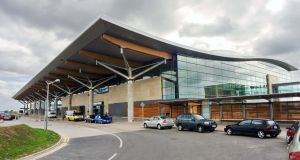 Norwegian Air International is still considering whether it will begin flying from Cork to New York following the launch of services to Providence Rhode Island earlier this year.

The airline originally indicated that it would consider services to New York from the airport when it first announced plans to begin flying from the Republic to the US.

However, Bjorn Kjos, chief executive of its parent group, Norwegian Air Shuttle, suggested earlier this year that Cork’s runway may be too short for journeys to New York.

The airline is considering the New York route after it began using newly-launched Boeing aircraft on the Providence route recently, but it is likely to be some time before the carrier establishes if it is possible.

“We will continue to assess the possibility of future new routes once we learn more about the operational capabilities of our brand new aircraft but our immediate focus at Cork is on the airport’s first ever transatlantic routes to Boston-Providence,” a spokesman said.

The length of Cork Airport’s runway, 2,133m, means Norwegian cannot fill the Boeing 737 Max aircraft it uses on the Providence route, to ensure the aircraft can take off.

However, because New York is further south, and thus a longer journey, when he raised the issue in April, Mr Kjos said that it may not be possible to complete it from Cork. He noted that this would depend on the fuel needed to reach New York. He explained that the airline would not know for sure until it began flying the new craft, is it was one of the first carriers to put the 737 Max into commercial service.

Since July, Norwegian Air International has been flying from Belfast, Cork, Dublin and Shannon to airports in the northeast US with access to Boston and New York.

1 Aldi to impose limits as Christmas toys go on sale
2 Fair deal? Family at odds with hospital and each other not so sure
3 What to consider if older person or loved one needs care at home
4 Irish elearning company LearnUpon closes €47.4 million investment
5 First look: Is the iPhone 12 Pro the best smartphone out there?
6 Monsoon landlords win challenge over creditors arrangement that cut rents
7 Ulster Bank to meet Paschal Donohoe to discuss bank’s future
8 Bank of America names new head of EU hub as Brexit looms
9 ‘I hate haggling because I hate when people do it to me’
10 Irish house prices could buck European trend and fall this year, says S&P
Real news has value SUBSCRIBE