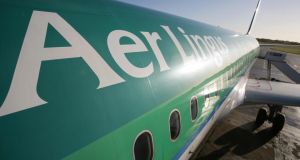 The Government and International Consolidated Airlines’ Group (IAG) remain divided over a key issue in the talks over a possible sale of Aer Lingus, but sources say that progress is being made towards a deal.

IAG is proposing to pay €1.36 billion for Aer Lingus and has been discussing the terms under which the Government would sell the State’s 25.1 per cent stake with senior officials since late February.

Responding to reports on Thursday that a deal is “imminent”, Minister for Transport Paschal Donohoe said he expected the talks to conclude within weeks.

The Government wants it to extend that period, possibly up to 10 years, before it will sell the State’s holding, while IAG is maintaining its position that it would not make commercial sense to go beyond the five-year guarantee.

However, sources say both sides understand the concerns the other has in relation to the commitment and say there is room for further progress.

IAG’s Irish chief executive Willie Walsh told the Oireachtas Joint Committee on Transport and Communications in February that it would be “commercial madness” for the group to extend its commitment to maintain services from Irish airports to Heathrow for longer than five years.

While he did not comment further during a visit to Dublin last month, Mr Walsh said his views on the issue had already been well publicised.

In a statement last February, Mr Donohoe said the Government required a longer period before it could consider a sale of the State’s holding in Aer Lingus to IAG.

Both sides’ corporate advisers have also looked at possible valuations of Aer Lingus’s 23 landing and take-off slots at Heathrow.

Scandinavian airline SAS recently sold two pairs of slots at the London hub for a total of $82 million, sparking speculation that the Irish flag carrier’s rights there could alone be worth close to what IAG is offering for the entire company.

The inter-departmental steering group, which is leading the Government’s side of the negotiations, and IAG’s representatives made progress in other areas, including the clarity that the coalition is seeking on jobs at the airline.

The talks have also dealt in some detail with Aer Lingus’s independence within IAG and the ownership and management of its brand.

Aer Lingus shares closed 3.8 per cent up at €2.38 on Thursday following reports that an agreement between IAG and the Government was imminent. The airline’s stock was almost 5 per cent ahead at one point during the morning.

Confirming that talks were continuing, Mr Donohoe said they continued to focus on the concerns he raised in February. Along with jobs and Heathrow access, they included aviation’s strategic importance to the Republic and competition based on having at least two substantial airlines with substantial bases within the State.