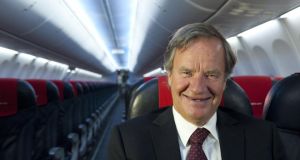 Norwegian Air Shuttle’s plans to launch a low-cost, long-haul airline from the Republic are continuing to come under pressure from both old and new rivals. Recently, its longest-standing competitor, Scandinavian legacy operator SAS, accused the Norwegian government of unfairly favouring the budget carrier.

Norwegian plans to operate low-cost, long-haul services connecting Europe with the US and Asia using its Dublin-based subsidiary, Norwegian Air International, whose Irish licences mean it is covered by air travel agreements between the EU and non-European countries. One of the most important of these is a treaty covering the EU-US and European Economic Area, which should allow an airline with an Irish Air Operator’s Certificate to fly from any EU jurisdiction to the US.

However, Washington’s Department of Transport recently refused Norwegian Air International’s request for a short-term permit to fly into the US and has said that it needs more time to consider an application for long-term permission.

Opponents of the plan, including rivals such as Delta, American and United Continental, along with pilots’ unions on both sides of the Atlantic, claim that its Irish registration is simply a flag of convenience, allowing Norwegian to circumvent onerous labour protection laws in its home country and employ low-wage workers.

The airline and its chief executive, Bjorn Kjos (above), have dismissed these claims as nonsense, pointing out that even if there were a particularly liberal regime in the Republic, it would not be able to take advantage because it has no operational base here. At least part of the reason for locating here is to finance its aircraft purchases and to run other HQ functions such as marketing.

None of this has deterred its opponents from continuing with their protests. Recently, SAS wrote to the Norwegian government repeating claims that the airline’s Irish licence allows it to outsource labour and to hire low-paid workers from Asia.

SAS and Norwegian Air Shuttle enjoy a particularly bitter rivalry. The low-cost airline’s founders established it as a direct competitor to the flag-carrier after SAS shut down its original air shuttle business.