Ryanair CEO, who has a 3.8% stake in airline, sees it ‘Always getting better’ charm offensive translate into a record share price 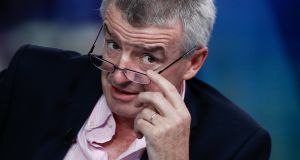 For Ryanair Holdings chief executive officer Michael O’Leary, being nice has its rewards. The Irish billionaire who in the past has derided passengers as “stupid” and environmentalists as “lying wankers” has become almost $500 million richer since the notoriously gruff airline embarked on a charm offensive last year.

O’Leary, 54, has a 3.8 per cent stake in Ryanair, which closed at a record high of €14.66 on Wednesday, rising 5 per cent since the beginning of the week. His $1.3 billion fortune has risen 26 per cent in 2015, according to the Bloomberg Billionaires Index.

“Every time you’re flying Ryanair, you’re adding to my share price, you’re adding to my profitability,” the billionaire said at a lunch hosted by the Institute of Directors in Dublin in September. “I need to keep being wealthy. Because if I’m to support one of Ireland’s biggest loss-making cattle breeding operations, and Ireland’s biggest loss-making national stud horse operation, I need everyone in this room to fly Ryanair.”

Robin Kiely, a Ryanair spokesman, said the company doesn’t comment on personal affairs and that O’Leary was available to comment.

The budget airline’s share price has more than doubled since January 2014 when it began a concerted effort to improve customer service by giving passengers the ability to choose seats and building a new, more user-friendly website. More recently, O’Leary has even extended his benevolence to competitors, offering to feed connecting traffic to long-haul rivals.

In the past, O’Leary raised eyebrows for publicly rebuking customers who failed to print their boarding passes and scorning environmentalists amid moves by the government to raise taxes on airfare to curb emissions. Criticism of the indifferent attitude towards customer service was shrugged off as its passenger numbers continued to grow. This began to change towards the end of 2013 when a wave of negative publicity hit Ryanair after the company charged a surgeon about $200 to change his flight after he learned his entire family had died in a house fire, according to a September 20th, 2013 story in the Daily Mail.

O’Leary later apologised and the airline gave a full refund. Further pressured by EasyJet’s successful business-oriented brand makeover, the airline hired a marketing guru, instructed its staff to be more courteous and began dropping practices customers hated, such as baggage charges and random seating. They called it the “Always Getting Better” plan, and since its adoption, Ryanair’s monthly passenger loads have steadily risen, hovering above 90 per cent since the start of its fiscal year in April. Last year, the airline boosted profit guidance five times and in September raised its full-year profit target 25 per cent.

1 ‘The recovery needs to be a full-scale economic renewal’
2 ‘I’m so lucky to be in the Caribbean – a million miles from Derry Girls’
3 Michael Smurfit: ‘I asked Trump to invite me to the White House for my 80th birthday’
4 Small businesses are cannon fodder in zealous anti-virus experiment
5 Tax and the Pandemic Unemployment Payment: Your questions answered
6 Joint accounts: if one of us dies, can the other access the money?
7 Charlie Chawke plans 290 apartments and hotel on Goat pub site
8 Ireland stands to benefit in a big way from investing in public transport
9 Ryanair expects air fares to fall when flights take off again
10 Household savings soar as consumers stop spending
Real news has value SUBSCRIBE