Avolon on track to meet 2013 targets after good first half 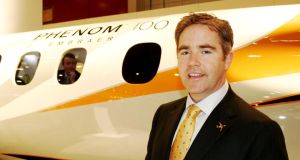 Dublin-based aircraft leasing group Avolon said in a trading statement yesterday it is on track to achieve its 2013 targets following a “strong first half”. During the first half, it delivered nine new aircraft, valued at more than $540 million, including a new B777-300ER and to American Airlines, B737-800s to American Airlines, China Eastern Airlines, Lion Air and TUI Travel; and, two new A320-200s to Avianca.

Its total fleet grew to 171 aircraft from 167 at the beginning of the year. Its delivered fleet stands at 96 aircraft. The lessor’s committed fleet includes the company’s first Boeing 787-8 Dreamliner. It grew its customer base to 36 airlines and its group of lenders to 24 banks and financial institutions.

Avolon, led by chief executive, Domhnall Slattery, said its balance sheet stands at $5.8 billion. Earlier this year, it launched Avolon Capital Parntners, a joint venture with US bank, Wells Fargo, which aims to build a $500 million aircraft portfolio. Also on the financing front, it extended and repriced an existing $365 million facility.