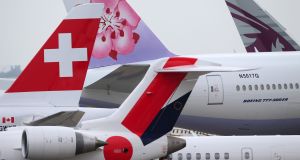 Dublin-based Avolon buys aircraft from manufacturers such as Airbus and Boeing and leases them to airlines, using the rent payments to repay the cash borrowed to buy the aircraft

Dublin-based Avolon buys aircraft from manufacturers such as Airbus and Boeing and leases them to airlines, using the rental payments to repay the cash borrowed to buy the aircraft.

Avolon said that at the end of last month the Dublin-headquartered group owned and managed 527 aircraft and had committed to buying a further 387. This was a 3 per cent increase on the third quarter of 2018.

Over the three-month period the company completed 21 deals, including new leases and extensions or follow-ons of existing agreements. The company delivered eight new craft to five airline customers.

Avolon’s banks also increased the amount of unsecured credit available to the Irish company by $225 million (€205m) to more than $3 billion.

In addition, the company extended the repayment date for its unsecured debt by 21 months to August 24th.