Tracker mess a sore subject for Government and ECB

European Central Bank is integral to most of the obvious solutions 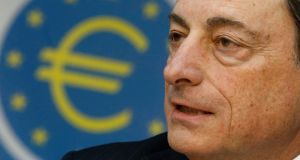 Whether the ECB’s Mario Draghi would be prepared to fund a vehicle or structure that would pay more than the market price for the Irish banks’ tracker mortgages is debatable. Photograph: Reuters/Lisi Niesner

Distance has once again afforded a clearer perspective on the Irish economy. On this occasion it’s the 3,400-odd miles between Dublin and Washington, where the International Monetary Fund is based. In the course of a conference call to mark the end of the seventh review of the Irish bailout last week, the IMF highlighted one of the the inconvenient truths running counter to the Irish recovery narrative: the tracker mortgage mess.

According to recent research by Merrion Stockbrokers* the three Government-backed banks – AIB, Bank of Ireland and Permanent TSB – lost €708 million on tracker mortgages last year. There are no comparable figures for Ulster Bank but they are presumably also feeling the pain.

These losses are a serious impediment to the banks’ efforts to return to profitability which in turn is a very serious obstacle
to the resumption of normal lending which is, of course, a perquisite for any sort of real recovery. Trackers are also hampering any sort of pick up in the property market because the banks are trying to recoup the money they are losing on trackers by pushing up rates on new mortgage lending. This, of course, makes trackers very valuable to borrowers, to the extent that having to give up your tracker might tip the balance against moving home.

It is a big problem and it has to be fixed, but the other troika members – the EU and ECB – have been much less vocal about it and so has the Government. The reason for that becomes evident once you realise that the ECB is integral to most of the obvious solutions.

The reason the banks are losing so much money on tracker mortgages is that they can no longer borrow more cheaply than the ECB. In the run-up to the 2008 financial crash, the Irish banks could borrow very cheaply in the markets and at less than the ECB would charge them. As a result mortgages priced off the ECB rate were profitable.

Write down
That all changed in 2008 and according to Merrion the Irish banks are currently borrowing money at an average interest rate of 1.9 per cent, which is a clear 1 per cent ahead of the ECB rate of 0.9 per cent. They also calculate that the average tracker interest rate is the ECB rate plus
1 per cent, ie 1.9 per cent. Therefore, the banks make no money at all and when
you take into account operational, credit and capital costs, they are losing €700 million.

The obvious solution is to take the tracker mortgages off the banks in a similar way to which the banks’ property and development loans were transferred to Nama. But by the same token they would have to be written down to their true value or to a level where it made sense for someone to buy them. A back-of-the-envelope calculation of the write down would be at least €700 million a year for 20 years, which is €14 billion or a 30 per cent haircut on the €46 billion in trackers at Bank of Ireland, AIB and Permanent TSB.

A €14 billion hit to the balance sheets of the Irish banks is not something anyone really wants to talk about right now. Hence the search for some sort of alternative solution that would see the tracker mortgages off-loaded at a much smaller and more manageable discount. This is where the ECB comes in. It is arguably the only bank in the world that could buy the Irish banks’ tracker mortgages at close to face value and make money.

More realistically it is one of the few banks that could fund a vehicle or structure that would pay more than the market price.

It is debatable whether even the more imaginative and flexible Mario Draghi-led ECB would be prepared to do this. They might be up for doing it “by accident”as was the case with the Anglo promissory note. Remember that the trick there was to collapse the bank so that the ECB was “forced” to take long-term Government bonds as payment for the money advanced against the promissory note.

What is not up for debate is that the Germans – and many other euro zone states – would be very, very unhappy if we pulled a similar stunt. Not least coming off the back of the Anglo tapes fiasco and in the run-up to the German election.

This presumably explains the reluctance of the Government and its European troika partners to put the issue firmly on the table.