Time has come for euro zone to risk expansion 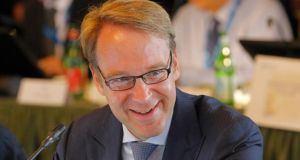 Might the policies of the euro zone result in a robust recovery? My answer is no. Since the euro zone generated 17 per cent of world output in 2013 (at market prices), that answer has global significance.

It is Germany that set the economic strategy of the euro zone. It consists of three elements: structural reform, fiscal discipline and monetary accommodation. So far this set of policies has failed to generate adequate demand: in the second quarter of 2014 real demand in the euro zone was 5 per cent smaller than it was in the first quarter of 2008.

Both France and Italy are being encouraged to accelerate “structural reforms” as a way to reignite growth in their own economies and so, given their importance, also in the euro zone. These two countries generate 38 per cent of euro zone gross domestic product, against 28 per cent for Germany alone.

In both economies the recommended programmes involve liberalising the labour market. They are both being encouraged to follow Germany’s “Hartz reforms”, introduced between 2003 and 2005, to which the country’s relatively good recent labour market performance is often attributed.

Yet the one thing those reforms did not do is create dynamic aggregate demand.

Examination of Germany’s sectoral financial balances – the differences between income and spending of the government, private sector and foreigners – strengthens this point.

The response of the German private sector to the reforms of the early 2000s was to increase financial surpluses massively: that is to spend far less than their incomes. Since the fiscal deficit also shrank, the capital outflow soared. This is striking and significant.

In brief, the response of the private sector to the labour market reforms and fiscal tightening was to become increasingly frugal and so accumulate large quantities of (often poor-quality) foreign assets.

This does not mean reforms achieved nothing. Germany has low unemployment despite quite weak growth. The UK also has relatively low unemployment despite still weaker post-crisis economic growth. In both cases the labour reforms encouraged the sharing of a large negative shock across the population via stagnant or even falling real earnings. A symptom of this form of an adjustment is weak productivity. In German industry productivity has not risen since 2007. Productivity performance has also been poor in the UK. But German unemployment was 4.9 per cent in July and the UK’s only 6 per cent against 10.4 per cent in France.

The upshot is that labour market reforms do little if anything to promote demand; in Germany’s case much of the demand has come from abroad.

The proper complement to structural reform is additional demand inside the euro zone. That is needed, in any case, to eliminate the difficulties being created by ultra-low inflation and the possibility of deflation. German core inflation of only 1.2 per cent is too low to let adjustment work satisfactorily.

Yet, partly because of its haven status, Germany is also able to borrow at extraordinarily favourable interest rates. The 30-year Bund is now yielding 1.8 per cent. If one assumes the European Central Bank will meet its inflation target, this means a long-term real interest rate of zero. Such negligible costs of borrowing must transform views of the costs of fiscal deficits. Germany should both refinance its debt at such rates and borrow to finance additional public investment. Focusing on deficits and debts without noticing the interest rate makes no sense.

The big challenge for the euro zone is not to create institutions but to promote adjustment and restore growth. The people of the euro zone cannot be expected to remain patient forever. Indeed, the dangers of continuing economic stagnation are obvious.

Germany is right that euro states need much long-term reform. But Germany is wrong to believe that this might, on its own, generate strong growth. The evidence from its experience with reforms is decisive on this point: it will not do so.

Nor does it make sense to rely on ever-greater external surpluses instead. A policy that may work for Germany alone (a debatable proposition) cannot work for an economy more than three times as big as Germany’s.

The euro zone needs to reach a bargain between more reform and extra demand. In doing so it must recognise that persistent stagnation is a big threat to stability. The euro zone should risk expansion. That is now the safer course.

1 My aunt never told us that Gran passed away with no will
2 Green Party TD queries ‘usefulness’ of another appeal in €13bn Apple tax case
3 Government to push through €2bn credit guarantee scheme next week
4 If it’s safe to do so, could this be the time to spend for Ireland?
5 Brussels plans attack on low-tax member states
6 Owners of Cork shopping centre sue for €30m after car causes fire
7 Majority of employees don’t want to return to pre-Covid working patterns
8 The $6bn judgment pitting Nigeria against Irish businessmen
9 Datalex shares slide almost 24% as trading suspension is lifted
10 Covid anxiety among domestic holidaymakers could sink this summer
Real news has value SUBSCRIBE