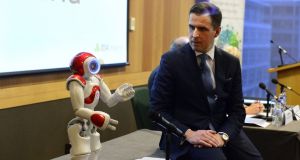 Martin Shanahan of the IDA Ireland speaking with a robot at the press conference to announce details of the 2016 results for the Authority at Dublin’s Convention Centre in January. Photograph: Cyril Byrne

The largest amounts of grant aid went to the main cities and towns with Dublin receiving €20 million, Cork €13 million, Galway just over €13.5 million, Limerick €13.5 million while €10.9 million went to Waterford.

The figures were issued to the Public Accounts Committee. Committee member Social Democrats TD Catherine Murphy said grant aid contracts were paid on a sliding scale over a number of years and well-established firms might no longer be receiving grants.

The Kildare North TD said it was a useful list “but it doesn’t tell us the amount of activity that is going on”. Further questions would have to be asked about what the return is for the investment. “You know what is being spent but don’t know what you’re getting for it.”

IDA chief executive Martin Shanahan told a committee hearing last month that 199,877 people were employed at the end of last year in companies supported by the agency, the highest level in the State’s history.

He said they had a target to increase investment in all regions outside Dublin by 30 per cent to 40 per cent but this was “extremely challenging given the global trend towards FDI (foreign direct investment) favouring large urban areas”.

Mr Shanahan told the committee: “To be very clear, Ireland has one city of international scale - Dublin. Everything thereafter is below that scale.”

Issues arise in areas where there are no urban populations of at least 100,000, he said. Ireland is competing for investment with cities like Shanghai which has a population of 23 million and Beijing which has 19 million.

Figures from the IDA which seeks foreign direct investment from across the globe showed the agency paid a total of €2.39 million last year in office and accommodation costs overseas including €648,000 in Asia, €1.3 million in the US and €430,000 in Europe.

Ms Murphy said the costs did not appear exorbitant. Ireland had to have a presence overseas and that was going to cost.

The agency gave the average but not individual total figures for accommodation costs for overseas staff. Average annual rents in North America were €68,103, €52,656 in Europe and €62,000 in Asia Pacific.