The Business Week: Radical shake-up of the euro zone, Brexit, and big moves for insurance 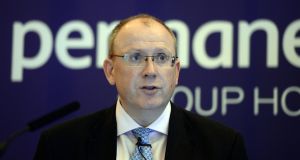 Permanent TSB announced losses of €425 million for 2015 and its share price nosedived. In an interview with The Irish Times Business Podcast on Wednesday, the bank’s chief executive Jeremy Masding said the price volatility in its stock was largely due to a lack of liquidity, which has a free float of just 25 per cent following its IPO last year.

ECB president Mario Draghi has been under pressure for months to do something radical to boost the flagging euro zone economy – and on Thursday he produced the big guns.

Stunning the markets by cutting its main rate to zero, the ECB also reduced the rate it pays banks to deposit money, and announced an aggressive expansion of its quantitative easing programme.

Draghi however dampened the initial excitement by saying there would be no more cuts, in the absence of extreme circumstances. This led some analysts to suggest his remarks completely undermined the stimulus package, but the ultimate effect remains to be seen. In the near term, the most definite impact for the ordinary Irish Joe is that repayments on tracker mortgages will come down slightly.

All of this ECB action was playing out against the backdrop of a turbulent international economic climate. With no taoiseach elected in the Dail on Thursday, the fate of the Irish economy and how the markets will react to a potential power vacuum is still very much a hot-button issue.

There were however more positive signs of health in the domestic picture this week. Ireland’s economy grew by 7.8 per cent last year, outstripping all other euro zone countries and most official forecasts. It was the fastest rate of growth recorded since 2000. And the good news continued as the Central Bank reported the number of mortgage accounts in arrears at the end of last year declined by 4 per cent to 88,292, while the National Treasury Management Agency managed to raise funds at ever-more negative interest rates.

Following a brief hiatus as the results of the general election were picked apart, the issue of Brexit and what impact it might have reappeared on the agenda again.

More and more colours are being nailed to the mast, but the Bank of England steered clear of endorsing one side or the other. All governor Mark Carney would do is point out that economic questions “are important” in terms of the broader decision.

Someone who did speak up was prominent British pro-European campaigner Charles Grant who called on Irish people to use whatever influence they can to “make a difference” ahead of June’s in/out referendum.

Again referencing the economic ties between the two States, he said that if Irish people were to appeal to the British and tell them they want them to stay, some of the “floating voters” would listen.

His appeal came during a week when Davy Stockbrokers said clear signs had emerged that uncertainty around Brexit is affecting economic growth in the UK. This was against a backdrop of sterling having depreciated against the dollar to its weakest level since 2009.

Another figure who called on people this side of the Irish Sea to coax the British to stay was AIB chairman Richard Pym. He said the “wider Irish family” should encourage family and friends in Britain to participate in the referendum.

Pym added the Irish economy faces a “tragedy” if Brexit comes to pass, and that while it might lead to greater foreign direct investment for the Republic, that would not necessarily “exceed the economic pain”.

He will have been heartened then with the launch of Irish4Europe in the House of Commons on Thursday. Business groups are among the backers of the new campaign to persuade Irish people living in the UK to vote for Britain to stay.

Some pro-EU campaigners have expressed concerns that a Brexit’s implications for Ireland are being overlooked. So, with at least half a million first generation Irish in Britain, the group said it will work through business networks and community groups to get its message across.

A Stormont inquiry into Nama’s sale of its Project Eagle Northern Ireland portfolio has been ruffling feathers on both sides of the Border. Its report said it was “unclear” why Minister for Finance Michael Noonan did not instruct the bad bank to suspend the sales process when it learned of suspect fee arrangements.

Nama said it was making no comment, while the committee said it was “particularly unhelpful” that Nama refused to attend an oral hearing. Meanwhile, Belfast businessman Gareth Graham settled his court action against US company Cerberus - the ultimate buyer of the Project Eagle loans - “to the full satisfaction of all parties”.

There were big moves in the health insurance sector as Aviva announced the sale of its health insurance business to Irish Life for an undisclosed sum. Irish Life also bought out the 51 per cent of GloHealth that it didn’t already own, transforming it into a major force in the sector. It immediately moved to say it would offer a “compelling alternative” to the existing players. The day after the deal, Aviva Ireland reported its best performance in five years by posting a 32 per cent rise in its operating profit, excluding non insurance activities, to €91.2 million.

Separately, motorists will be hoping to avoid a once-off extra premium of €50 on their car insurance bills. After the Court of Appeal upheld a High Court decision that the Motor Insurers’ Bureau of Ireland should be liable to pay out claims against people who had cover with collapsed insurer Setanta, the MIBI’s board has applied to the Supreme Court for leave to appeal.

Elsewhere, Permanent TSB announced losses of €425 million for 2015 and its share price nosedived. In an interview with The Irish Times Business Podcast on Wednesday, the bank’s chief executive Jeremy Masding said the price volatility in its stock was largely due to a lack of liquidity, which has a free float of just 25 per cent following its IPO last year.

There was bad news for troubled oil and gas explorer Petroceltic which had an examiner appointed before Worldview Capital, its 29 per cent dissident shareholder, took control of a majority of its $232 million debt pile. The Cayman Islands-registered fund said it bought 69.44 per cent of the senior debt at “a significant discount to face value”.

Elsewhere, revenues at ferry company Irish Continental Group (ICG) jumped 10 per cent last year to €320.6 million from €290.1 million on the back of increased passengers, lower fuel prices and currency fluctuations. And all that before the summer’s European Championships in France when an army of football fans will be using any and all means to reach their destination.

Paddy Power Betfair said its operating profits last year were €283.5 million, but executives said it would be August before they have a better picture of the lay of the land - by then, a host of high-profile horse racing events, as well as the European Championships and the 2016 Olympics, will have taken place.

In another indication of improvement in the economy, DIY retailer Grafton, which owns Woodies, said a “bounce back” in consumer confidence contributed to strong growth in sales and profits across Ireland and the UK last year as revenues rose 6 per cent to a record £2.2 billion.

There was bad news for rural Ireland as a report by the Farmers Journal said the average price paid for farm land in Ireland fell by almost €1,000 per acre last year. There was also suggestion from the ESRI that the relatively low price of property outside Dublin, when compared to prices in the capital, could lead to a return of the “unsustainable” boom-era practice of long-distance commuting between Dublin and its hinterland. This came just after another ESRI report found limited scope for addressing a shortage of housing by encouraging older people to move out of houses that are too big for their needs.

The corporate tax issue reared its head again as tensions between Washington and Brussels over the EU’s clampdown on the tax practices of US multinationals intensified. Adopting a hard line, the US Treasury warned that it could impose retaliatory measures on European companies and individuals.

“Don’t hold your breath,” was the reply from EU Competition Commissioner Margrethe Vestager when asked about the timing of a decision on the state-aid probe into Apple’s tax arrangements with Ireland.