The 24 finalists together employ over 5,200 people with revenues of more than €477m 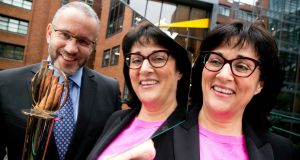 Pictured ahead of this year’s EY Entrepreneur of the Year Awards are Kevin McLoughlin, partner lead for the programme and Anne Heraty, chief executive of Cpl Resources and chair of the judging panel

The CityWest Hotel in Dublin is the place to be tonight as around 1,500 business leaders from across Ireland come together for the unveiling of this year’s EY Entrepreneur of the Year Awards winner.

The programme, now in its 20th year, works to recognise, promote and build a supportive community around Ireland’s high-growth entrepreneurs.

This year’s 24 finalists were selected by an independent judging panel chaired by 2006 EY Entrepreneur of the Year Anne Heraty, who is chief executive of CPL Resources, in three categories – Emerging Entrepreneur, Industry Entrepreneur and International Entrepreneur.

The overall winner of the programme will go on to represent Ireland at World Entrepreneur of the Year in Monaco in June 2018.

The finalists in the international category are: Harry Hughes of Portwest; Mark Barrett of APC; Darragh Cullen of Edge Innovate; Brendan Monaghan of Neueda; Fergus and Frances McArdle of Height for Hire; Jane Gallagher and Roisin Callaghan of Cogs and Marvels; Kevin O’Loughlin of Nostra; and Alan Foy of Blueface.

“Over the past 20 years, EY has had the privilege of recognising the integral part entrepreneurs play in creating value and employment on the island of Ireland through the EY Entrepreneur Of The Year programme,” said Kevin McLoughlin, partner lead for the awards.

EY estimates that the awards’ 470-plus alumni entrepreneurs today employ more than 183,200 people and have generated more than €18.6 billion in revenue.