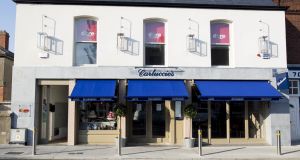 Operating losses jumped 92 per cent to €536,056 for the 12 months to the end of September 2016 after the company revalued one of its properties, the accounts for Carluccio’s Ireland Limited show.

However, earnings before interest, tax, depreciation and amortisation increased by 30 per cent to €317,000.

The Irish arm of the brand founded by Italian chef Antonio Carluccio in the early 1990s has two restaurants operating at present. Its flagship premises on Dawson Street was followed by the opening of a Glasthule outlet in 2015. Earlier this year it was announced that a further premises in Cork would open by the end of 2017.

In 2010, Carluccio’s was bought by Dubai-based investment company Landmark Group for £90 million. Other brands controlled by Landmark include Spar, shoe brands Ecco and Kurt Geiger, and doughnut company Krispy Kreme.

The buyback occurred after the former franchisees had spent an estimated €4 million on the business, which struggled to succeed due to what it saw as high rents.

The franchise buyback was coupled with a rent reduction on the company’s flagship Dawson Street premises of in the region of 50 per cent on the almost- €700,000 the original franchise-holders were reported to have paid.

When non-trading items are excluded the Irish stores made a small profit of €43,106 on revenue of €4.59 million, up by 11 per cent on the previous year.

The company increased its staff numbers in Ireland in the first nine months of 2015 to 73 employees. However, the increase of three employees came in tandem with an almost 7 per cent drop in wage and salary costs to €1.52 million.

Accounts filed in the UK for the company’s immediate parent company, Carluccio’s Limited, show that a capital contribution of £1.45 million was advanced to the Irish operation in 2015. As of September 25th last year, some £286,000 was still owing from the Irish operation.

The UK company recorded an income of £521,000 from Carluccio’s Ireland in the period, down from £1.12 million the previous year.

“The company operates in the hospitality and retail sector in Dublin and is dependent for its trade on the state of the Irish economy, tourism and consumer confidence, all of which continue to be challenging,” the directors report noted.

“Despite these challenges, the company continues to trade well and its operational performance is positive,” it added.

Aside from its restaurants in the UK and Ireland, Carluccio’s has three outlets in Turkey, seven in Dubai, one in Doha and one in Abu Dhabi. The company had two restaurants in the United States at the turn of the year; however, it closed both of those in June.

No comment on the results was available from Carluccio’s.