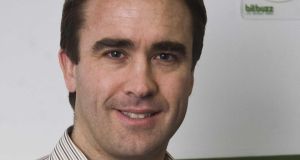 Shane Deasy, who owns 48.13 per cent of Bitbuzz, said the company had received “four to five offers from different companies”

Irish wifi provider Bitbuzz increased its revenues in 2013 by 13 per cent to about €2.2 million, figures provided to The Irish Times show.

Bitbuzz’s founder, Shane Deasy, also said the company received approaches from potential suitors this year and he would consider a sale of the business if the right deal emerged.

Mr Deasy, who owns 48.13 per cent of Bitbuzz, said the company had received “four to five offers from different companies”. Some were “kicking the tyres” but “others were serious offers”.

He declined to reveal the identities of the company’s suitors but said interest had been expressed by both foreign and Irish groups. “We had a number of people speaking to us in 2013...there’s a lot of interest.”

“It has to make sense to us,” Mr Deasy said of a potential sale. “We want to find a home for Bitbuzz where we can grow and develop the business further.”

Mr Deasy indicated that the company has appointed a corporate adviser to help it evaluate its options. It uses Grant Thornton as its auditor and Mason Hayes & Curran as its legal adviser.

Competitive
Providing internet services via broadband and wifi has become hugely competitive in Ireland over the past few years with large companies such as Eircom, UPC, Sky and Vodafone fighting for market share alongside niche providers, including Bitbuzz.

Mr Deasy’s company has specialised in offering wifi in the tourism, retail and leisure sectors, notably hotels and cafes in Ireland and the UK.

Its services are available in 12,000 hotel bedrooms. Recent contract wins including a deal with the Fitzwilliam Hotel on St Stephen’s Green in Dublin and with the Holiday Inn Express chain in the UK.

Hotel market
Bitbuzz is planning to aggressively target the Irish hotel market for expansion. “Next year, we want to put on another 80 hotels in Ireland and the UK, with two-thirds of that in Ireland, and 120 the following year,” Mr Deasy said.

Other recent deals include a contract with stores operated by the Cork-based wholesale group Musgrave, Insomnia and Costa Coffee.