What do you do when a big-name coach chucks your tech into the stands? 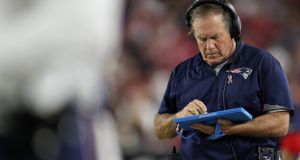 Technology has brought a new level of professionalism to sports and represents an excellent marketing opportunity for the big names in the tech world as well.

Of course, any association always carries risks. Like when the high-profile head coach of the American football’s most dominant team, New England Patriots coach Bill Belichick, chucked Microsoft’s new Surface tablet computer into the stands in full view of the crowd and thousands of TV viewers.

In 2016, he told reporters on a conference call at length – five minutes and 26 seconds – why he was ditching tablets and returning to a more traditional paper-based system. The Patriots coach isn’t the only one who had a pop at the Surface, with the tablet feeling the wrath of several players too.

Microsoft’s deal with the NFL began in 2014, when the company began supplying tablets to the league to replace the printed photographs football teams use to review gameplay tactics and player positions during a game. In the past, the photos were printed and run to the coaches in a binder; the tablet computers replaced all that, sending the photos instantly. At least that’s the plan.

As director of sports technology, Mike Downey is responsible for some of the company’s big sports deals being done. He thinks Belichick may have been won over again to the benefits of tablet technology; to back that claim up, there was footage of him early this year throwing a Surface into the stands – the tablet survived, incidentally – proving that Belichick was still using it at the very least, and that a good case can make all the difference for the durability of the tech.

“The devices on the sideline are using wifi, and in a stadium filled with 60,000-plus people, every one of them with a cellphone with a wifi signal turned on, it is a nightmare to have a reliable wifi connection on the field. That is by far the hardest problem to solve,” he says. “I think the times – the very few times – that you’ve seen a lot of frustration while using that device, like coach Belichick, it is probably a combination of what’s happening in the game that causes frustration and if the data connection goes down, guess what, you don’t get the photos. If you’re a coach, you’re upset because the thing you were trying to use it for isn’t able to load that information.”

As Downey explains: “We’re just trying to make the NFL better through technology. So in the case of the NFL, which is the most lucrative sport in the world, we put our Surface tablet on every NFL sideline, and then build software that the teams use during the game to get better insights about what’s happening in the game."

Downey has delivered other big name deals in the sporting world, having spent a decade at Microsoft, after a stint at Adobe where he worked on Flash before moving to the tech giant and taking over its ESPN partnership.

Microsoft’s sporting partners include Renault Formula One, Hendrick Motorsports in Nascar and a multiyear deal with Real Madrid, which has now ended. Most recently, it signed a deal with the largest esports team in the world, Cloud 9.

“We’re very selective in our partners, because a lot of sports partnerships are really just branding deals like brand exposure, so a lot of them are just like paying for the ability to put their logo up next to the league or the team. That’s not a part of our strategy,” he says.

“Ours is really around this technical storytelling, which means we’re really selective in who we partner with. We really want to get an authentic story. There are certain clubs or score leagues we will talk to. And when we first sit down with them, it becomes clear that it doesn’t make sense, from a technology standpoint, there’s not the right tech story for us to tell versus what we’d have to pay in order to tell it.”

There is a reason why Microsoft is targeting sports: as far as fan engagement goes, it is at the top of the list, certainly for marketers trying to get a message across.

“The engagement level is so high that it enables us to accomplish a marketing mission, which is to build brand love for Microsoft. So what we’re really trying to do is find opportunities, where there are fans of a given brand, and see if we can, if we can partner up with that brand, do something really special for it, that the fans appreciate and enjoy and are engaged by, and therefore those fans, ideally become fans of our brand as well,” Downey says.

“And it’s great because fans really care about all the details of their favourite sport. So if we go in and we say, alright, we’re going to partner with your favourite team, we’re going to use advanced analytics – data collection, predictive analytics, machine learning, artificial intelligence – all these great technologies and we’re going to do that to help them get a competitive advantage. Then we demonstrate some level of success throughout the project. The fans love that: ‘Here’s a tech company coming in and helping make my favourite team better at what they do.’ And we do that.”

Hitting the right audiences is another part of it, with Microsoft conscious of not just heading for North America or aiming at a certain age, gender or culture.

“In sports, it’s really easy to end up being very north US-centric or very European-centric. We try to spread it around quite a bit. That’s one of the reasons esports is so fascinating to us, is that the age group is the lowest across all of sports, which is huge value. And, and the fan base is literally everywhere, like they’re all around the world.”

Downey’s favourite deal has been the one with the PGA Tour. Microsoft took all the data the PGA had been recording for years and turned it into part of a system that could be mined for interesting contextual facts during tournaments, enabling the PGA to build a more engaging entertainment product for fans.

“So, given a certain scenario, Rory McIlroy is two shots behind the leader on the final day of the tournament, and he’s on the 17th hole, par five, and he misses his drive into a fairway bunker. The wind is greater than 10 miles per hour into his face. You see all these parameters, basically, like all these things are happening right now. Now, knowing that, [the system] mines this stats database and gives us data that’s very specific to that one situation.

“Broadcasters are getting information sent to them that says, well actually Rory’s seen this now, this is the seventh time he’s been in this specific position. And he’s recovered from this shot 82 per cent of the time, you know, or something like that.”

But is there a danger that the overuse of technology will spoil the enjoyment of the sport for fans? In the case of VAR, for example, the controversial technology has its detractors as well as its fans. It has only made its debut in the Premier League this season, so it’s still early days for it. While some say it has added to the tension and drama, others find its use confusing.

Other technologies are about stacking up the microadvantages to create a winning team. From the sports teams’ points of view, it’s all about efficiencies – finding ways to avoid injury, finding the best drills to help the team train smarter rather than harder.

“Back in the day, these weren’t multibillion-dollar businesses, but now they are. The industry and ecosystem around surrounding sports is exponentially larger than it used to be. It’s a whole other ballgame now. Sports is just another business, you know, and all businesses are looking at the same problems – how can we use technology to make better decisions and to be more efficient with our time,” Downey says.

“At the end of the day,  it’s just a world where technology is helping these teams, as businesses, run more efficiently. It's about making better decisions, using statistics to their advantage, ideally preventing injury, because nothing really sours the fan experience faster than an injury. And so using data-science analytics to help prevent injury alone is something that can really benefit the fans in the long run.

“The pinnacle of data science is being able to make better decisions using data and being able to measure the impact of the changes that you’re making. That’s where things get really ground-breaking.”

The march of technology in the sports arena is unlikely to halt any time soon. From artificial intelligence and machine learning to ways of engaging fans, the sports of the future look like they will in some way be powered by technology. In Ireland, there are companies already taking advantage of that, including Northern Ireland’s Statsports, which has some significant deals under its belt. There is also a growing esports scene in Ireland too, although things are still at a very early stage.

That will be one of the things on his mind when Downey takes to the stage in Dublin later this month for the One-Zero conference.

“There appears to be a lot of interest in esports, with this audience, which doesn’t surprise me at all,” he says “I’m probably going to focus very largely on esports, making some connections to things that we’ve learned from traditional sports, because I think a lot of the audience are coming to this from a traditional sports perspective.

“I’m going to share our own findings as Microsoft and what we learned going through it. But then, of course, it’s also talking about the technology. I’m an engineer, that’s my favourite thing to talk about – what does the technology look like? What are the opportunities like? The technology opportunities in esports are huge right now, there’s some interesting things to happen.”

1 Majority of employees don’t want to return to pre-Covid working patterns
2 ‘I set up an investment club many years ago with a bunch of friends’
3 Varadkar and Donohoe to meet banks to discuss mortgage breaks
4 Cigarette sales, Leo to meet the banks, and Arclight’s €20m payout
5 Tobacco giant’s menthol-ban substitutes take 5% share of Irish market
Real news has value SUBSCRIBE