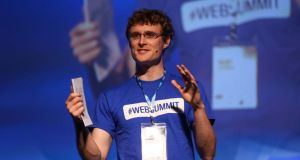 Web Summit founder Paddy Cosgrave said the Pitch start-up competition is going to be bigger and of a higher quality than ever this year with 200 finalists pitching this November.

The Web Summit is set to host Europe’s largest-start up competition this November, with 200 start-ups from around the world competing.

The technology conference has signed a sponsorship deal with Coca-Cola for the Pitch competition, and the two winning teams will be flown to the company’s headquarters in Atlanta, Georgia, where they will meet with executives for strategy sessions. They will also receive funding from the drinks giant.

“The world is changing all around us, and we therefore must change with the world to continue to thrive as a business,” Mr Wollaert said.

Last year, start-ups based in more than 90 countries submitted thousands of applications to compete for a chance to win a €75,000 prize. The winner was Import.io, a data extraction company from London.

Web Summit founder Paddy Cosgrave said the competition is going to be bigger and of a higher quality than ever this year with 200 finalists pitching this November.

“Some of these start-ups are fundamentally changing the world with their ideas,” he added.

1 Coronavirus: New government could face €11bn of austerity
2 HSBC board rethinks overhaul and seeks even deeper cuts
3 Joint accounts: if one of us dies, can the other access the money?
4 Investor alleges fraud over collapse in property fund value
5 Stocktake: History says this is not a bear market rally
Real news has value SUBSCRIBE