Summit is fantastic for its speaker line-up; frustrating, because the majority of the talks and panels are a dinky 20 minutes long 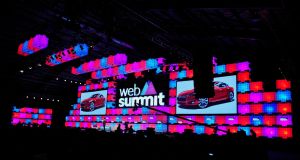 The main stage of the Web Summit this year: an event fantastic and frustrating in equal measure

So, the last Web Summit in Dublin (for now? For ever? Who knows) kicks off Tuesday.

It promises to be a combination of fantastic and frustrating for anyone attending.

In terms of speakers: fantastic, because there’s nothing else like it for bringing in top names in the technology sector. Along with the tech A-list will be a varied cast of individuals representing some of the most exciting established companies and the industry’s rising stars.

This year’s Summit promises around a thousand speakers across the 21 sub-Summit topic areas. I’ve spent a two-decade career going to technology events around the world, but Web Summit will bring in plenty of people I’ve never heard or met, that I want to go see.

Web Summit cofounder Paddy Cosgrave uses an algorithmic approach I’ve seen demonstrated, that pretty much guarantees most speakers are people at the centre of a circle of peer interest, measured through social media and other variables.

But, frustrating, because the majority of the talks and panels are a dinky 20 minutes long, including the introductions. This is just too short, especially for the big names, and for panels, because they typically comprise three or four people who only have time to make a couple of (brief) contributions.

I’d far prefer fewer speakers and more substantive content (though maybe this truncated soundbite format is a comment on what the web has done to attention spans).

After speakers, a major feature of Web Summit is always networking. On the fantastic side, a thousand speakers are there, and tens of thousands of attendees, including angel investors and venture capitalists, companies of all types, prospective acquisitions and employees.

On the frustrating side: a thousand speakers are there, and tens of thousands of attendees, etc.

Though there’s an app to help attendees meet people - it will recommend who you should meet and enables chat between attendees - this is a vast event now, with a far diminished likelihood that you’ll stumble felicitously upon an investor or desired business contact.

The 21 mini Summits on special subject areas such as health, marketing, music and sport could potentially bring together a smaller coterie of relevant people and restore some of the Summit’s former intimacy back when it wasn’t so huge. But equally, they fracture a potential audience, especially as some stages are long walks apart and - as noted above - those teensy talk times mean a session may be over by the time you find the stage.

I heard both points made last year. Some found the sub-Summits really useful; they drove others crazy.

But anyone who expects to use the Summit for serious networking needs to do a lot of preparatory homework. Productive people will have set up key meetings in advance. They’ll also have though through what they want to get out of the event, not just wander around hoping something useful will happen.

As for start-ups - these have always been at the centre of Web Summit, for better or for worse. For better -and on the fantastic side - any startup can get in for the price of a ticket and have the chance to do some focused networking (see above). They can hear some extraordinary speakers and maybe, corner them later on, perhaps in the after hours socialising.

On the frustrating side, some start-ups will have decided to pay €1950 to get a (tiny) booth and admit four people. Many past start-up attendees have complained that no one goes to the booths and it was hard to meet anyone significant. There are some long anti-Summit rants online about these issues.

I’d fall in the middle on this one. I think the size of the event makes it hard now for startups to get a lot of value out of a booth, or much spontaneous networking. I know from talking to VCs that most don’t wander the booths any longer. Given Web Summit’s size, they are too busy with meetings set up weeks previously.

But I also don’t see why startups should get a free ride to an event that really, isn’t just about flogging start-ups (and so, is not really comparable to some of the sector start-up events that critics compare it to).

And I’ve spoken to many startups that do get a lot out of Web Summit. I think a big part of the problem is, inexperienced founders arrive and expect things to happen without having put much prep work into attending.

That’s the wrong way to do the Summit. If I had a start-up, I’d do this: get the early bird two-for-one tickets to get in two of the start-up team. Forego the booth. Research and prepare. Go to as many relevant talks as you can. Absorb the advice from speakers, most of whom run (or ran) start-ups. Set up meetings in advance. Use the app to try to set up others.

There’s plenty that is frustrating. Plenty. For start-ups. For anyone (oh, let me count the ways). But no other event will give you so many significant speakers in the (broadly defined) tech sector, nor as useful an opportunity to network. Just expect to work at it, if you want the Summit to work for you.