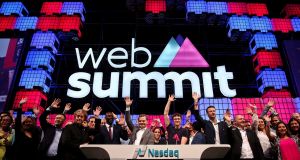 The founder and chief executive of Web Summit Paddy Cosgrave (centre, right) waves accompanied by other participants during the Nasdaq Bell opening ceremony at the third day of the Web Summit in Lisbon, Portugal, on Wednesday. Photograph: Andre Kosters/EPA

The peer-to-peer currency exchange firm, which had previously raised €18 million in two funding rounds, announced at the Web Summit in Lisbon that it is planning a major push to increase its business and SME customers, founder Brett Meyers said, with marketing among its top priorities for investment.

“It’s primarily stepping things up on the marketing side, we didn’t really do that this year,” he said.

CurrencyFair has already gone through a rebrand, and has begun building up its management team, with the latest announcement of additions another rung on the ladder.

Sylvie McDermott, formerly of Betfair, is the company’s new chief product officer. Ms McDermott will be overseeing developments to CurrencyFair’s products, particularly with regards to its business offering.

Founder Brett Meyers is to become chief strategy officer, a move he said will leave him free to concentrate on the company’s direction.

“It’s a good change,” he said. “Over the last couple of years I was spending most of my time fundraising or recruiting and hiring the top team. To some extent that meant strategy took a back seat, looking out three or four years, getting out into the market and talking to people, that’s really what I’m good at. I felt I was spending all my time doing executing things, rather than adding most value to the business. “

CurrencyFair is poised to accelerate its global growth, having appointed a new chief marketing officer earlier this year.