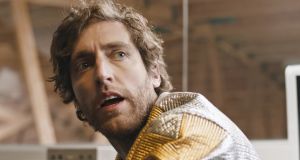 Thomas Middleditch in ‘Sunspring’: Middleditch does a good job of taking gibberish and running with it but the script seems to mostly consist of characters who seem continually confused

This short film is bizarre and funny. Middleditch does a good job of taking gibberish and running with it but the script seems to mostly consist of characters who seem continually confused, asking each other: “What do you mean,” “I don’t know what you’re talking about,” etc.

Having said that, it wasn’t much different than watching some actors tackle Shakespeare. Sunspring is kind of brilliant and worth watching for the Whose Line Is It Anyway? feel. There’s even a trippy song/dream sequence.