Fireside chat drew more than 3,000 into the main stage 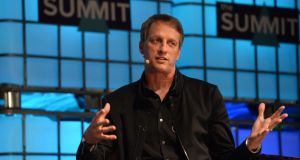 Tony Hawk at the opening day of the Web Summit.

While Tony Hawk may be better known for his skateboarding skills, his experience with the technology industry in recent years and his role as an angel investor made him a top choice for the web summit.

His fireside chat with Kevin Rose drew more than 3,000 into the main stage hall, but it was very nearly a no-show for the sports star.

Only a day earlier, news leaked out that a personal matter – his son suffered an injury – would prevent him travelling to Dublin.

Luckily for fans and web summit attendees eager to see the skateboarder in person, his son’s injury improved overnight, meaning Hawk could make the trip.

Philanthropic work
It was his philanthropic work that first sparked his involvement with the summit. He was in Ethiopia on behalf of Charity: Water when he met Paddy Cosgrave, who was there with a group from Founders. He was subsequently invited to take part in the summit, an invitation he accepted.

“This is the hub. These are the people who control the internet for the most part and the people who are really making new ways for us to share our lives together,” he said.

“Anything new technology is always interesting to me, either devices or apps. Anything wireless. I feel like even though we’ve established so much through new technology there’s so much that can be better from it, there’s so many areas to improve. We’ve just scratched the surface of what’s possible, especially with audio and video.”

Although he wasn’t coming to the summit with the intention of finding investment targets, Hawk will be checking out the promising start-ups on the show floor.

“If it’s something I know instinctively that I would use or want to share with other people, that’s what I would get involved with,” he said.

Hawk has experienced first hand how things have changed dramatically in recent years. When he started out making the Tony Hawk series of video games, everything was console based. These days, however, the shift towards mobile devices presents both opportunities and challenges.

“The whole industry has changed so much and the approach has to change. If you’re not a first-person shooter that’s popular, there’s just so many different titles you have to rise above, and now people are mostly playing on their phones. It’s a totally different beast now,” he said.

“We’ve embraced that it is where you need to go. We did a port [adaptation of Pro Skater] for the iPhone and I was really proud of that because it was an exact port. I’ve been pushing to do something for iOS and for mobile devices for a while.”

It’s a tough market to be in though, with Hawk acknowledging that the target market is price-sensitive, which can make it difficult to cover the cost of creating a game.

“If your game doesn’t go gangbusters, you don’t even get paid for development,” he said. “It’s really hard.”