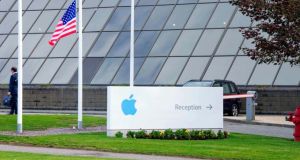 Apple’s use of Irish companies to shield tens of millions of dollars of overseas profit away from high US corporate tax rates was sharply criticised by a Senate panel three years ago in Washington, prompting the EU investigation into alleged illicit subsidies. A ruling on the investigation into Apple’s Irish tax arrangements is expected soon. Photograph: Michael MacSweeney

The US treasury has fired a warning shot at the European Commission ahead of its ruling on whether Ireland broke state aid rules by agreeing a sweetheart tax deal with California tech giant Apple, suggesting Brussels was acting like “a supra-national tax authority”.

The American finance ministry has raised concerns about the commission’s targeting of US firms in competition and state aid investigations, warning it could “create an unfortunate international tax policy precedent”.

Treasury official Robert Stack warned in a paper published on Wednesday that US taxpayers could end up footing the retrospective tax bills imposed by Brussels on American multinationals operating in Europe arising from its investigations.

In an ominous warning for Ireland, which relies heavily on US corporate investment, Mr Stack said in his paper that a substantial number of additional commission investigations against US firms – as Brussels has suggested – “may lead to a growing chilling effect on US-EU cross-border investment”.

The voicing of such strong public concerns comes after months of lobbying by US treasury officials fearing the consequences of the look-back audit on tax deals between European states and companies such as Apple, Amazon, Starbucks and McDonald’s.

Apple’s use of Irish companies to shield tens of millions of dollars of overseas profit away from high US corporate tax rates was sharply criticised by a Senate panel three years ago in Washington, prompting the EU investigation into alleged illicit subsidies.

A ruling on the investigation into Apple’s Irish tax arrangements is expected soon.

Adverse findings against the companies could have “major implications” for the US and the EU’s recovery of taxes “an outsized impact” on the firms, said Mr Stack.

“The US treasury department continues to consider potential responses should the commission continue its present course,” said Mr Stack.

The Obama administration’s concerns are rooted in what it sees as a shift in position by the commission that undermines existing tax treaties between the US and individual states and “broadly accepted” international tax arrangements, and erodes efforts by G20 countries to combat corporate tax evasion globally.

“US taxpayers could wind up eventually footing the bill for these state aid recoveries in the form of foreign tax credits that would offset the US tax bills of these companies,” said Mr Stack, a deputy assistant secretary for international tax affairs.

The treasury describes in the paper the commission’s approach as “new” and “unforeseeable” by the American companies and EU member states.

Ahead of the commission imposing potentially large tax penalties on the US firms, Mr Stack said Brussels should not recover taxes “in a new approach in a retroactive manner because it sets a bad precedent for tax policymakers around the world”.

The commission said that it “takes note” of the US treasury’s paper and that it remained available to clarify how it applies “established principles of EU state aid law”.

Daniel Shaviro, a tax professor at New York University school of law, said that the US treasury’s paper was unusual but not a surprise given what is at stake.

“I have had a sense of how vehement US opinion is, including in the administration, and this reflects the combination of the companies yelling and screaming about it and the quite reasonable feeling that it is in the US interest to stop this,” he said.