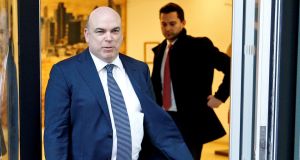 The US tech giant is suing Autonomy founder Mike Lynch and former Autonomy chief financial officer Sushovan Hussain, claiming the two men were behind a fraudulent manipulation of Autonomy’s accounting information on a huge scale, leading to HP paying an extra $5 billion for the software group in 2011. The two men deny any wrongdoing.

On Wednesday, the third day of the blockbuster civil trial, Mr Lynch’s lawyers set out his defence. They alleged that after HP shareholders reacted negatively to the Autonomy acquisition, the company’s board members “lost their nerve” and “turned on the former management and sought to blame them”.

Robert Miles QC, acting for Mr Lynch, told the High Court that soon after HP bought Autonomy, its share price fell and enthusiasm for the acquisition “fizzled out”. HP later fired chief executive Léo Apotheker, who helped negotiate the Autonomy deal, and replaced him with Meg Whitman, who refocused the business on hardware.

Mr Lynch, wearing a grey suit, sat quietly in the back of the crowded courtroom, in the same row as his lawyers from Clifford Chance, the “magic circle” law firm. He was accompanied by several public relations advisers.

In November 2012, HP said it was writing down the value of Autonomy by $8.8 billion, telling the market that a large chunk of the writedown was because of fraud.

Mr Miles claimed that HP drew up a communications strategy, called Operation Sutton, ahead of the announcement to enable the US group to “minimise the negative effect of Autonomy” and “get their oar in first”. He said this was done “to protect the back of Meg Whitman” and to “preserve and protect the credibility of the chief executive and management”.

A document submitted to the court said that as part of the strategy, Ms Whitman and other HP executives called then UK prime minister David Cameron and business secretary Vince Cable on the day the writedown was announced. Letters were also sent to chancellor George Osborne and other government ministers.

The High Court trial is expected to last for nine months.

Mr Hussain was convicted in the US on similar charges last year, and is due to be sentenced in May. He faces a potential sentence of more than 20 years in prison.