Twitter shares soar 35 per cent on back of user growth

Revenue more than doubles to $312.2m and user growth jumps 24% at microblogging firm 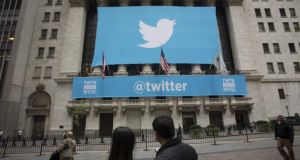 An @twitter banner is displayed on the exterior of the New York Stock Exchange. The microblogging company said revenue more than doubled to $312.2 million in the second quarter. Photo: Bloomberg

Twitter chief executive officer Dick Costolo is getting the company back on track with Wall Street by drawing people to use the service more, sending shares soaring more than 35 percent.

While Twitter’s net loss widened to $144.6 million, the company forecast sales for the current quarter that exceeded estimates and raised its full-year guidance.

Mr Costolo bolstered the numbers by making a case on the earnings call for Twitter’s opportunities.

He said including the audience for tweets beyond its own platform, the company’s reach is more than twice its active user base.

Twitter’s World Cup features show what it can do for future events, he added. Costolo said revenue rose mostly because users spent more time on the service, as the product was tweaked to better attract them.

The results and comments are part of Mr Costolo’s comeback attempt for the San Francisco-based company.

After two straight quarters of decelerating user growth, which followed Twitter’s initial public offering in November, investors had questioned whether the company’s fastest sales growth was in the past.

“Our main message today was that we’re looking to build, and we know we can build, the largest audience in the world,” Mr Costolo said in an interview yesterday. “We can deliver on that promise.”

The stock, which reached a record $73.31 on December 26, had plunged 47 per cent since then on concerns that Twitter wasn’t growing quickly enough to justify its valuation.

The company is among the most expensive in technology based on projected 2014 sales.

1 Irish company to test vaccines on volunteers deliberately infected with Covid-19
2 Bank of Ireland sees more than 1,400 staff apply for redundancy
3 Air travel never going ‘back to way it was’
4 ECB plots Amazon-style website to sell soured Covid loans
5 Should I switch bank now with Ulster Bank at risk of closing?
Real news has value SUBSCRIBE