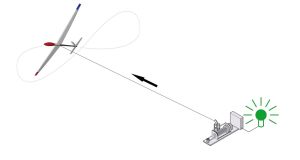 A Dutch astrophysicist has designed a “flying” wind turbine which may avert environmental conflicts over large-scale wind farms if it proves to be commercially viable.

The flying turbine, which resembles a glider on a tether, moves in figures of eight. Its generator or “anchor” on the ground then converts the movement into electricity.

By capturing stronger winds at greater heights, it can generate eight times more energy than normal wind turbines, and won’t fly in very bad weather, he pointed out.

The average wind turbine can weigh about 120 tonnes, while the glider system weighs about 0.4 of a tonne

“When you take the actual blades on conventional turbines, only 30 per cent, or the tip of the blade, is doing 100 per cent of the work,” he said.

Dr Ruiterkamp said that the “PowerPlanes” which his company, Ampyx Power, is testing in the Netherlands, use autonomous drones to fly.

Among his sponsors are the World Wide Fund for Nature, while his company has also used crowdfunding to generate start-up finance and has secured European Commission Horizon 2020 money.

This could have multiplier effects in reducing energy costs and harmful energy emissions worldwide, he said.

“This shows that drones can be used for society’s benefit,” he said, noting that he had his own reservations about state licensing authorities allowing the market to have a complete free-run with drone technology.

Dr Ruiterkamp, who holds a PhD in astrophysics from Leiden university, has worked on airborne wind energy systems since 2006, initially as assistant professor at Delft University of Technology.