Tesla Motors gave a sneak preview Thursday (March 31) of its Model 3 sedan, saying more than 130,000 people had ordered the car, even though it is more than a year away from production. Video: Tesla 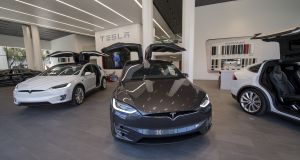 Electric car giant Tesla is coming to Ireland next year. The Silicon Valley firm, led by tech innovator Elon Musk, is preparing to open a store in Ireland in 2017, along with rolling out supercharging stations on the island.

The store is likely to be in Dublin, while the likely locations of the four supercharging stations are Dublin, Cork, Galway and Belfast.

The supercharging stations allow for fast – and free – recharging for Tesla owners. Each station comprises between six and eight charging stands and are customarily located near food and retail facilities. According to the firm, 30 minutes plugged into one of these stands gives a Tesla a range of over 270km. According to official figures, Tesla’s current fleet of electric vehicles can travel up to 613km on a single full charge.

Peter Bardenfleth-Hansen, Tesla Motors’ director of Nordic sales, says the opening of the Irish store “will happen simultaneously with the introduction of superchargers”. He told The Irish Times the firm was “pretty far into the process” of entering the Irish market. The Irish store will be operated directly by Tesla.

However, the firm will partner with others for the introduction of supercharging stations. “Usually we partner with a site that has the amenities for our customers to be able to use the restrooms and restaurant. Customers will be in that location for anything between 30 minutes and an hour. We have an unwritten rule of thumb that it needs to be a place where a mother with children coming in at 10pm at night feels safe.”

While he would not go into detail on the investment costs, he said there is a significant infrastructural development required.

“Each stand is about 135kW and it’s very rare that we come to a site where there is enough power, so usually it involves quite a bit of digging because we have a lot of cabling to put into the ground in order to set up a supercharger station.” Tesla currently has 4,543 supercharger stands at 727 locations worldwide.