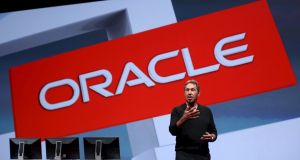 Oracle’s exectutive chairman of the bBoard and chief technology officer Larry Ellison. The company is taking on 450 people in Dublin

Oracle is to add 450 sales jobs at its Dublin offices in a European-wide expansion to support the growth of its cloud computing business.

The jobs represent over a third - the largest share - of 1,400 new sales positions announced today for the EMEA (Europe, Middle East and Africa) region. Additional recruitment will be focused on five further EMEA locations: Amsterdam (400 jobs); Cairo and Dubai (250); Malaga (100) and Prague (100).

“It’s a big day for the country. It’s a big statement of confidence in us by Oracle,” said An Taoiseach, Enda Kenny, at the jobs announcement in Oracle offices in Dublin’s East Point Business Park.

He added that the 450 new jobs represented one of the biggest jobs announcements made in Ireland “in a long time.”

The new hires will bring Oracle’s Irish employee numbers to just under 2,000. The company already has 1,400 people in its workforce here.

Oracle has rapidly expanded its cloud business in recent years, remaking itself from a database supplier into one of the largest cloud-focused technology multinationals.

“We want to be number one in cloud computing,” he said. Ireland was chosen for the 450 new positions “because we already have an established hub here” in the cloud sales area.

Five years ago, the company didn’t even have a single data centre, a mark of how swiftly cloud computing has developed generally and as a company focus, Oracle country manager Paul O’Riordan said.

“We’re looking for people who can help make our transition to cloud computing,” Mr O’Kelly said.

Prospective employees might be people with existing cloud computing experience but Oracle primarily wanted “bright, enthusiastic people and we’ll give them training here.” He quipped that Oracle would be happy to consider politicians if any were seeking new positions after the coming national election.

Oracle also officially opened a new, extensively refurbished building to accommodate its expansion, adding a sixth building in the park to its Dublin footprint.

The building, whose meeting rooms carry names such as Nimbus and Stratus, features a specially design social media hub room with a wall of large screens on which employees can monitor social media posts and ‘sentiment’ about client companies in real time.

“It’s the first Oracle building with a social media hub as part of its build,” said Mr O’Kelly, adding the company was likely to replicate the centre across operations worldwide.

Minister for Jobs, Enterprise and Innovation, Richard Bruton said Oracle was a “hidden gem” in his constituency, which includes the East Park area.

He said the Government had “invested substantially in that resource” by beefing up the employee numbers in the Data Protection Commissioner’s Office, providing new offices, and appointing a minister of state, Dara Murphy, with responsibility for data protection.