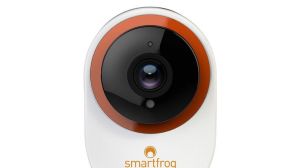 The Smartfrog app can be set to generate alerts when the camera detects movement or noise, so even the smallest movement will start recording

Five minutes to install or your money back. That is the claim that Smartfrog makes on its box, so it must be reasonably confident that it can get the job done within that time limit. And you would imagine that the claim had little to fear from a reasonably tech-savvy person installing it, right?

Not quite. The first attempt went badly wrong for reasons unknown. Whether it was the wifi connection playing up or just the camera not playing ball, that five-minute deadline came and went with no joy. So I gave it up as a bad job and resolved to try it again a few days later.

It was more than a week before I steeled myself to try again. This time round it was done and dusted within minutes, easily meeting the company’s claims, so I’m blaming my wifi connection rather than the camera.

In fact, it was fairly painless the second time. The app guides you through the process and the camera itself talks to you at certain intervals throughout the set-up. When it’s ready for you to begin connecting the camera, a very polite woman announces: “Smartfrog camera ready.”

Decode the blinking lights – green, blue, red – and you’ll race through the whole thing. The camera itself is compact and easy to position. It’s a bit flatter than the Nest Cam, for example, but aesthetics are subjective and it essentially does the same job. The Smartfrog also has a stand that it clips into and it can be positioned according to your own requirements.

Once all that is set up, you are good to go. The app can be set to generate alerts when the camera detects movement or noise, so even the smallest movement will start recording. If you want a bit of a higher bar than “slight mouse twitch”, you can set the sensitivity higher and each of the recordings are saved with a timestamp and a thumbnail so you can scroll quickly through the footage if you need to.

Speaking of the footage, it is a decent quality, even when looking at it live. If you were using it as a security camera you’d get decent video from it instead of grainy CCTV. Even the low light and night footage is better than you’d expect – and better than other, more highly-priced cameras.

You can talk through the app too: hold down the microphone and you can hear your voice in the room, even if you’re on the other side of the world. It all depends on what you’re using the camera for, but the audio is surprisingly good. Watch as family pets (and family) freeze as you order them to get their feet off the sofa, or stop trying to scale the bookshelves. It’s mildly amusing.

The camera can be bought separately, with four hours of video history included, or as part of a monthly billed surveillance bundle. That bundle offers you the camera and 24-hour video history for €6 per month. You can cancel it at any time, but if you do it within 24 months, you have to hand the camera back too; after that, it’s yours to keep.

Smartfrog also offers extended video history for a bumped up price; €15 per month will get you up to 30 days of footage to browse through. The Smartfrog camera is just one piece of the overall picture though. The app can be installed on your smartphone, tablet or laptop, turning your devices’ cameras – including webcams – into surveillance cameras too. That old iPad you’ve been keeping, gathering dust since you upgraded? It’s suddenly useful again.

It’s flexible. From the price plans to the physical camera, the Smartfrog HD video camera will adapt itself to most indoor situations.

The back of the camera occasionally heated up quite a bit. Unless you’re sitting within arm’s reach of it, you probably won’t notice though. Also, it doesn’t have a rechargeable battery, so it needs to be kept plugged in at all times.

There’s a microSD card slot on the rear of the camera, and the microphone can come in handy for intermittently ordering the dog off the sofa.

A good, flexible camera for those who need a high-quality eye on their home.

1 How long can Government afford to keep State pension age at 66?
2 Guinness brings out a non-alcoholic version of the black stuff
3 Frank Fitzgibbon stepping down as Sunday Times editor
4 How much will a Covid-19 vaccine cost?
5 Don’t worry about the deficit – the lockdown risk is to jobs
Real news has value SUBSCRIBE