Can HTC recover lost ground with a new flagship phone? 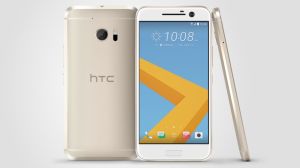 HTC may have lost ground to rival Samsung but that doesn’t mean the phone maker is giving up. Oh no, it’s hitting back harder with the HTC 10.

At first glance, this is unmistakably a HTC handset. There have been some minor design changes, but you won’t confuse this with the Samsung S7 Edge, for example. It’s a nice phone, but there’s no instant wow factor. Then again HTC has found a design that works for its customers and it’s sticking to it.

The rear of the phone is metal, the front is all glass. HTC fans will notice the omission of the front facing speakers, and the home button is a fingerprint scanner.

At 161g, it weighs in a little heavier than its rivals, but it’s not prohibitively heavy.

The screen is quad HD and stretches to 5.2 inches.

There are some things HTC acknowledges it didn’t do well with the M9. The camera, for example, wasn’t top class. So it has gone back to the drawing board to create the HTC 10’s camera unit, increasing the size of the pixels, widening the aperture and adding optical image stabilisation into both the rear and front camera. The autofocus has been improved, with laser focus that helps zoom in on the subject more quickly and more accurately.

So what’s the end result? The photographs captured on the HTC’s rear camera are impressive. It handles low light better than some current flagship smartphones, and moves from bright sunshine – rare as it is in this country – to murkier, cloudy weather without too much trouble. Indoors, it struggles a little in some circumstances, but overall the images it produces would stand up to most of the top-level phone cameras on the market at the moment. It is facing stiff competition from the Huawei P9 though.

The front camera is a little less impressive. Although it brings in optical stabilisation, the 5 megapixel camera still suffers from the same lack of detail on closer inspection as other phone cameras.

The video camera is capable of capturing 4K video at 30 frames per second, and will also record audio in high resolution. HTC is confident this is something we have all been missing from the 4K video footage we’ve shot, so it’s including the headphones that will support high-res audio in the box. That’s a clear jab at other phone makers who have offered things like fast charging and high-res audio, but require consumers to shell out a bit more to actually use the functions.

You’ll need a decent amount of storage capacity for the 4K video. The 32GB of included space won’t go far if you’re set on the high-resolution standard. However, HTC has included a microSD slot to expand that space.

The HTC 10 is the latest smartphone to make the leap to the new USB C standard. There are some advantages to that – the cables are reversible, so they’re easier to fit, and you can streamline all manner of functions into one port – but it also means you’ll have to make sure you have your charging cable with you when you’re likely to need a power boost, at least until the rest of the mobile industry is using the same.

The battery life is good, but not the best out of the current pack of smartphones, with the 3,000 mAh lasting about a day of heavy use. That’s not bad for a smartphone, but it’s good that the HTC 10 comes with fast charging. If you need a quick burst of power, under 15 minutes will get you a 50 per cent charge; a full charge will be completed in about an hour. That’s assuming you’re using the HTC charger in the box though.

When you really push the HTC 10, it stands up well to the task. Powered by a quad-core Snapdragon 820, the device comes with 4GB of RAM, and switched between tasks without slowing noticeably, even when pushing it with several power hungry applications.

The camera on the HTC 10 is a great improvement from the M9. The manual controls and RAW format are great to have for more experienced photographers.

The included speakers don’t seem to be as good as the front facing speakers on previous HTC One handsets. The device is also a bit heavier than its super sleek rivals.

The Android 6 phone also comes with the ability to add stickers to the homepage that correspond to your favourite apps. No more apps cluttering up the place.

The HTC 10 is a return to good form for the mobile maker.