Smarter than your average rubber duckie 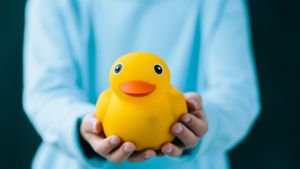 Edwin the Duck: smarter than your average rubber duck

Where to buy: http://www.apple.com/

Anyone who finds themselves sitting in of an evening, shaking a rubber duck to burst digitally rendered balloons and avoid being stung by cartoon bees might rethink their life choices.

But there are worse ways to spend an evening, especially when it means testing some of the newest high tech toys.

Meet Edwin. Edwin is smarter than your average rubber duck. Not only does he do the usual rubber duck things, like float aimlessly in the bath – upright instead of sideways, unlike many ducks before him – but he also acts as an interactive toy, a night light, a bath thermometer and a Bluetooth speaker.

He’s quite the multitasker.

It’s the little details that make Edwin appealing. His charger is a green nest, down to the micro USB cable and plug. When he’s charging, his head briefly flashes so you know he’s sitting on the dock correctly; the colour it flashes – yellow or green, for example – will tell you how much charge is left in his battery. And while most of body is rigid due to the technology it contains, he still feels like a rubber duck, with a soft silicon covering and a squishy head.

Edwin has a heart that only becomes visible when he needs charging (it beats yellow), when he’s ready to connect to a device (the heartbeat changes to green) or he is connected.

He’s been an instant hit around these parts.

The box contains only basic instructions on how to set the toy up, but despite his extra functions Edwin doesn’t really need a lot of tinkering. Tap his wing firmly to start the night light, or pat him on the chest or tail to hear him quack. When he’s floating in the bath, his head glows red to warn you if the water temperature is too hot. Edwin is waterproof, so he doesn’t require delicate handling – which is probably wise given the target market.

The real appeal, though, is with Edwin as an interactive toy. He has his own apps – one for stories, games and music, and the other for his night functions – in which he has a starring role.

Not only does Edwin share his own songs through the Bluetooth speaker, but he also connects to any Bluetooth enabled audio source to play whatever audio you see fit.

The speaker quality won’t challenge your regular Bluetooth or wired speakers, but if you play Let it Go to a room full of toddlers through Edwin, see how many of them turn around and complain the treble isn’t “quite right” or that the silicon covering dulls the sound a little so it’s not quite crystal clear.The speaker also communicates Edwin’s occasional quacks.

Edwin is not only a multitasker, he appeals to a range of ages. The idea is that he grows with your child, so while they may not be suited to the more complex games yet, as they get older they’ll still find a use for the toy.

There needs to be more to Edwin, particularly on the interactive content side. At the time of writing, only one story was available, although two more are marked as coming soon. There are also more games planned, which will up the duck’s repertoire a little.

Edwin hasn’t been released in Europe yet but he’s coming. He will cost you $100 at the moment, which is a sizeable investment for a bath toy, but if you take into account his multiple functions, Edwin doesn’t seem like too bad an investment.

HHH A bit on the pricey side for a rubber duck, but this one can move outside the bathtub.