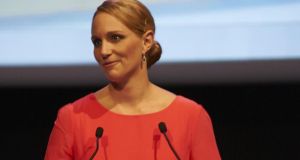 President of the Fibre to the Home (FTTH) Council of Europe, Karin Ahl: “I think you’re hesitating [in Ireland] because you can’t really see the added value for the moment.”

The president of the Fibre to the Home (FTTH) Council of Europe, Karin Ahl has claimed Ireland’s broadband services will suffer a debilitating “bottleneck” effect due to current fibre offerings.

In a call backed by Swedish IT and Energy Minister, Anna Karin Hatt, Ahl said that the prevalent fibre broadband products in the Irish market are “not the solution in the long term”.

Ahl and Minister Hatt were two of the main speakers at the three-day FTTH Council of Europe Conference in Stockholm, attended by 3,000 delegates.

At present, the fibre broadband products available on the Irish market are largely based on fibre to the cabinet (FTTC) standards whereby the broadband connection is delivered to the nearest cabinet to a home or business rather than directly into the building.

With only an estimated 14,000 Irish homes currently taking advantage of the superfast FTTH model, Ahl told The Irish Times that if FTTC standards are still in place in “five, 10 or 15 years’ time”, the Irish market “won’t have sufficient feeder cables from the end connection point”, leading to a “depreciation” of broadband services.

“I have never seen that anybody has designed a network that’s to the cabinet that will work in 25 years’ time,” said Ahl, “it’s a shared medium, you don’t have a synchronised up and down speed which means more and more customers will add to the bottleneck in the cabinet. As [users] have more and more gadgets and more and more megabits to download and upload, there will be a constraint in the cabinet.”

The FTTH President said that current broadband standards in the Irish market represented only an “interim” solution, while Minister Hatt added that “governments need to continue with public funding [for FTTH] and local municipalities must be engaged too”.

“Most member states realise this is an infrastructure for the future,” Minister Hatt told The Irish Times .

As with last year’s league table, Lithuania topped the list with 34 per cent of the country using FTTH, with Sweden following in second place on a figure of 26.5 per cent. Latvia, Norway and Russia rounded out the top five European FTTH nations, while Germany and the UK also failed to make the 2014 table.

Back in Ireland, UPC Ireland VP of networks Conor Harrison said that current fibre optic cable offerings in the Irish market represent “an effective competitor with lower capital investment needed than FTTH”, adding that “synchronised up and down data speeds may not be the game changer that FTTH operators are banking on”.

Geoff Shakespeare, technology evolution and development chief with the eircom Group, meanwhile said the company is “rolling out fibre to the cabinet with a built-in evolution path to fibre to the drop point (FTTdP) and ultimately fibre to the home”, while Magnet Networks CEO, Mark Kellett said that “fibre-to-the-premises” remains “the only clear solution to truly future proof any new developments” in broadband infrastructure.

Both Ahl and Hatt said FTTH has been a particularly fruitful broadband solution in Sweden’s rural areas. With the latter noting that “the Sahara desert has a higher population density than Sweden has north of Stockholm”, Minister Hatt added that €250 million in Swedish government funds has been ploughed into projects across hundreds of locally run “small FTTH organisations”.

Minister Hatt said that in rural areas there is a “strong will of developing your own neighbourhood” which has led to numerous projects where community FTTH groups “literally dig” the “trenches” needed to supply fibre broadband directly to homes.

Ahl, who said she can “understand that [Ireland] won’t have the investment money or instruments to provide FTTH from day one”, maintained that boosting FTTH infrastructure here will likely require Government-level intervention.

“I think you’re hesitating [in Ireland] because you can’t really see the added value for the moment,” said Ahl, adding that Ireland needs “the government policy side to intervene or interfere with carriers if they don’t do what they should to stimulate the market”.

While an initially costly public spend will be required, Ahl said new figures have revealed that a return on the investment in the long term is viable with the Mayor of Stockholm, Sten Nordin announcing to FTTH delegates that the city had gained a reported a €1.8 billion return on high-speed fibre broadband investment over the past 20 years.

In addition, Ahl warned that FTTH will prove to be a “differentiator” in gaining future foreign direct investment while Minister Hatt also told conference delegates that access to high-speed connectivity will have major monetary benefits.

“Recent studies have shown that when broadband penetration rates increase by 10 per cent, GDP increases by 1 per cent. It’s an issue of increasing growth and wealth in our societies,” said the IT and Energy Minister.

1 How to gift your child a house deposit . . . tax free
2 BOI customers to be charged twice with bank fees on New Year’s Eve
3 Irish designer of Oxford vaccine: ‘I’ve never worked so hard in my life’
4 Son putting elderly dad under pressure to sign over land
5 Workers have little idea of the cost of retirement income
Real news has value SUBSCRIBE