Review: The purpose of a lightweight device is defeated if you need to add on an external drive 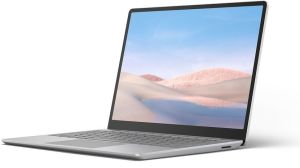 The laptop has a decent number of ports, with a full-size Type A USB, a USB C and a headphone jack.

I’ve been a fan of the Surface Laptop since it launched in 2017. It combined the two things I needed: decent-sized keyboard for type and a touch screen for everything else. It was the right size to shove into my bag when I needed to work on the move. And it handled everything I could throw at it, including one very active toddler who has tried his best to destroy it in the past couple of years. Not only has it survived him repeatedly and deliberately standing on it while closed (with one crack to the screen that hasn’t affected its use at all) but it also bounced back from an unfortunate incident with bubble mixture that saw the keyboard deliver gibberish (I know, how could I tell the difference, you ask) for a couple of days.

So it was with interest that I opened the Surface Laptop Go. A smaller version of the current Surface Laptop, the Laptop Go is aimed at those who want a lighter laptop. It comes with a 12.4 inch screen, weighing in at 1.1kg, making it the ideal travel companion.

Taken at face value, the lowest spec – 4GB RAM and 64GB storage – won’t do much for you. The storage drive is quite small, and even if this is meant to be a second device, it’s a little too pricey at just under €640 to fulfil that role comfortably. It is also eMMC, which is a cheaper version of flash storage that can be slower than other solid state drives.

The mid-range one with 128GB of storage – which is SSD, rather than eMMC – is probably of more use, but you may find that drive fills up a little too quickly, and it defeats the purpose of going for a lightweight laptop if you need to add on an external drive because you can’t always rely on cloud storage.

The version I tested was the 256GB version, which came with 16GB of RAM. As far as using it as a work machine went, the Surface Laptop Go handled my virtual desktop and minimal image editing requirements without too much trouble. The keyboard was comfortable to type on, although it did divide opinion. While I found it reasonably comfortable, a quick poll of my (admittedly limited) office environment found that some thought the keyboard a little cramped, with some criticism of the keyboard travel. It’s a lot quieter than the original Surface Laptop though, which has its benefits.

The 12.4in touch sensitive display has a 3:2 aspect ratio, which means you can fit a lot in. However, if you are all about the resolution, this is where the Surface laptop Go may fall down. It has a 1536 x 1024 resolution, which translates to 148 pixels per inch; that is far lower than the Surface Laptop 3, which has a 2256 x 1504 and 201 pixels per inch resolution. It’s not immediately obvious that the resolution is lower, but push it too much and you will see the difference.

The laptop has a decent number of ports, with a full-size Type A USB, a USB C and a headphone jack. The power cable is proprietary Surface, which is a little irritating when you have been used to USB C power adapters, but it’s not the end of the world.

As far as security goes, the Surface Laptop Go comes with a fingerprint reader built in to the power button, but no support for Windows Hello for facial recognition. That fingerprint reader is not available on the 64GB version, which is another reason to give that version a miss.

There are a few other things that are sacrificed too. The webcam is 720p resolution, rather than 1080, which you really notice when you fire up your video conferencing service. It is grainy and doesn’t cope well with any kind of difficult lighting conditions. The backlit keyboard is also absent. While that may not sound like much of a big deal –you could just move to somewhere that has better light – there are times when the lack of backlighting causes an issue.

The Surface Laptop Go is a good compromise for those who want portability but still need a keyboard. It is lightweight and for the average user will perform most tasks very well.

It’s hard to justify the price of the Surface Laptop Go when you can spend a similar amount of money on a much higher spec laptop, particularly at the more expensive end of the range. The lack of a backlit keyboard and the murky webcam are a particular annoyance.

The Surface Laptop Go fits in with the rest of the Surface lineup in terms of looks -- although the metal bottom case of the laptop has been replaced with a type of plastic.

A good portable option, if you aren’t bothered about the sacrifices.