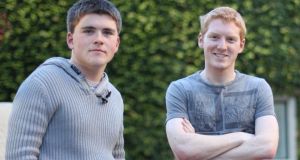 John and Patrick Collison, co-founders of Stripe, outside their offices in Palo Alto, California. Their digital currency will, unlike bitcoin, support traditional currencies such as dollars, sterling and the euro.

Irish-founded payments company Stripe has upped the ante in the battle to bring digital currency into mainstream use, investing $3 million in the launch of a challenger to bitcoin.

The start-up, founded by Limerick brothers John and Patrick Collison, has backed a currency and decentralised payment network called Stellar.

Stellar aims to make digital currency mainstream, something that bitcoin has not managed to do thus far. Bitcoin is still the dominant digital currency globally. But unlike bitcoin, Stellar will support traditional currencies such as dollars, sterling and the euro.

Stripe said there would initially be 100 billion stellar, of which 95 per cent would be doled out for free, in an attempt to introduce more people to the idea of cryptocurrencies. New coins will later be added at a rate of 1 per cent per year.

San Francisco-based Stripe has invested $3 million in Stellar in return for 2 per cent of all stellars. It said the digital currency’s value will be determined by the market.

If any company has the cash to back a new digital currency, it’s Stripe. In January of this year, the company raised $80 million in Series C funding, valuing it at $1.75 billion.