Stripe leads $102m funding round in US start-up Fast 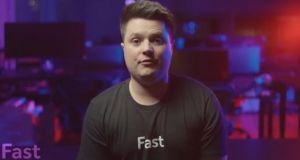 This is the second time the online payments company founded by Irish brothers Patrick and John Collison has led a funding round for Fast. It previously spearheaded a $20 million investment in the company in March 2020.

Its flagship solution, Fast Checkout, allows consumers to complete purchases with a single click on any browser, platform or device. According to the start-up, its solutions help retailers overcome issues with shopping cart abandonment, which typically happens due to frustrations experienced trying to pay for goods and services.

The start-up, which has raised $124 million with other backers including Addition and Index Ventures, intends to use the new funding to double down on product expansion as it also looks to expand beyond the US.

“The positive response we’ve received from online sellers who have installed Fast Checkout has been overwhelming, and the funding we are announcing today will enable Fast to meet the demand to bring one-click buying to even more e-commerce stores,” said Mr Holland, the company’s chief executive.

Fast has growth from just two people to 90 over the last year and plans to have more than 200 employees by the end of 2021.

The investment comes as online sales skyrocketed last year with the global e-commerce market reaching $3.9 trillion on the back of the Covid crisis.

Stripe has stepped up its investments in recent years, with investments in start-ups that include Monzo, Step, Stedi and PayMongo. It has also made a number of acquisitions, including buying Nigerian start-up Paystack for more than $200 million last October, and Irish start-up Touchtech Payments for an undisclosed sum in 2019.

Founded in 2010, Stripe employs more than 2,800 people globally, including about 300 in Ireland. It was valued at $36 billion following a funding round last year although it is thought to be worth considerably more now given the jump in online purchases.

Bloomberg reported late last year that the company was in talks on a new funding round that could value it at as much as $100 billion.