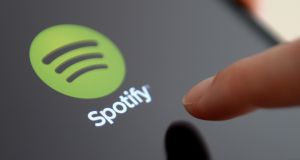 Spotify has remained the market leader in streaming. But Apple has grown its service rapidly, amassing 17 million paying users in just over a year since its launch. Photograph: PA

Spotify has reached 40 million paying customers, a week after rival Apple Music announced its service had grown to 17 million subscribers, as the music streaming wars heat up.

With 100 million users across the globe, Spotify has remained the market leader in streaming. But Apple has grown its service rapidly, amassing 17 million paying users in just over a year since its launch.

The iPhone maker has lured new customers through so-called “exclusives” – launching album releases from big stars only on Apple Music for an initial period. Spotify has hit out at the exclusives model, with a spokesman saying that long-term exclusives are “bad for artists and bad for fans”.

The two companies face an increasingly crowded space as the music industry scrambles to adjust to streaming as the dominant way to listen to music. This year streaming overtook digital downloads as the biggest source of US music revenue. Amazon, Pandora and Vevo are preparing their own paid streaming services, adding to competition from Deezer, SoundCloud, Tidal and Google Play. – Copyright The Financial Times Limited 2016

5 Proposed fishing deal could be ‘unmitigated disaster’ for Ireland