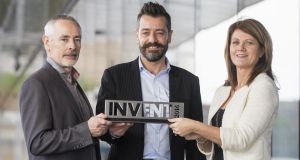 An extreme sports ramp invented by a former all-Ireland mountain bike champion has taken first prize ahead of 99 other brilliant ideas in a competition designed to find Northern Ireland’s “next big thing”.

Jumpack, a foldable, wearable ramp for BMXers, skateboarders and other extreme-sports fans, saw off considerable competition from some of the North’s brightest high-tech talent to win the overall 2016 Invent Award at Belfast’s Waterfront Hall on Thursday night.

The inspiration for Jumpack initially struck Phillip McIntosh – a former Northern Ireland BMX champion and the all-Ireland downhill MTB master champion – while he was on holiday with his family and watched three young BMX riders struggling with a sheet of plywood and concrete blocks.

His “what-if moment” began a 10-year design process which hit a high note on Thursday night when he and his business partner Mike Crowe walked off with both the top prize in the Invent Awards and a first-place cheque for £13,000 (€15,000).

The annual awards, organised by Catalyst, the not-for-profit organisation formerly known as the NI Science Park, in partnership with Bank of Ireland, are intended to find innovations in the North with “the greatest commercial potential”.

The awards, in their 10th year, had a total prize fund of £33,000 (€38,000) but also promise the kind of welcome publicity that attracts potential investors and mentors.

Out of the original 100 entries this year only 12 were shortlisted in six categories to take part in the finals on Thursday night in front of an audience of 600 including the North’s Economy Minister, Simon Hamilton.

Although the Jumpack duo won the engineering category and was named overall winner five other entrepreneurial teams also shared in the celebrations and took home prize cheques of £2,500.

These included Jonny Clarke and Michael Budden for Locate a Locum, an online solution to help pharmacies source locums; and Aidan Kelly, the inventor of the Oran Oak Dip Fast, a rotational moulded sheep-showering unit.