Silicon Valley’s time to be satirised has truly arrived 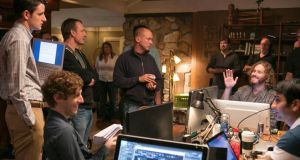 For the first decade of my life, I lived smack in the middle of a little California city with a funny name. No one had heard of it. I had to explain it was kind of near San Francisco.

A couple more decades went by. And still, few people recognised the name of the place where I grew up.

Fast forward to 2014, and I am laughing my head off watching a new US sitcom from HBO, Silicon Valley , set in, yes, Palo Alto. These days, half the world seems to know where Palo Alto is. So many that you can set a sitcom there to make specific, biting satirical points.

Who would ever have thought Palo Alto would have that kind of resonance – an efficient signifier for a certain kind of Valley culture, its mores, attitudes, practices?

When I lived there, people whose technology shares had just vested had not yet started tearing down the city’s charming, whimsical houses in order to erect overbearing MacMansions. They didn’t piously shop in Whole Foods, or party in slick brew pubs in the hopes of bumping into a venture capitalist.

Ah, now you can begin to see exactly why Palo Alto is the perfect setting for a satire. Certainly, those who watched this shift over time, such as my parents and their friends, saw the possibility years ago. The area’s latest, more ridiculous demonstrations of hubris were always gleefully recounted when they’d get together.

Silicon Valley (which will be on Sky Atlantic this summer) nails those painful truths and the cliches, based around the excitement, promise and fun of the place, and its foibles, downsides and frustrations. Exactly what a satire should do.

There are the stupid parties with hardly a woman in sight, young geeks standing around with their plastic cups of keg beer, music provided by, in this case, Kid Rock.

Oh, I have been there. For example, at Comdex (back when the big Las Vegas electronics event still existed, pre-CES), when I was at a similar party hosted by EDS. (Remember EDS? The company, founded by Ross Perot, was acquired by Hewlett-Packard).

Bare Naked Ladies and then rising star Macy Gray performed for us. They sang songs whose lyrics had been changed to praiseful ditties about EDS.


Rich pickings
At such moments, many of us considered the rich satirical pickings available in the tech industry. But the time was not right for a sitcom. Not enough people saw such ridiculousness regularly. An audience would have seen it not as satire, but as extreme fiction.

Now, the time clearly is right. Shows such as The IT Crowd and The Big Bang Theory have set the stage. But they didn’t aim squarely at the ground zero of the tech universe as satirical fodder in its own right. So they haven’t seemed to ruffle finely preened geek feathers in the way Silicon Valley has (surely, the most satisfying sign of a successful lampoon).

Some very high-profile Valley figures have taken umbrage at the series. PayPal, SpaceX and Tesla founder Elon Musk was a prominent complainer. “None of those characters were software engineers. Software engineers are more helpful, thoughtful, and smarter. They’re weird, but not in the same way.”

Oh, come on. Setting aside that bizarre final sentence (what – we have official gradations of acceptable-to-unacceptable geek weirdness?), those Silicon Valley engineers – programmers and “brogrammers” – were a total hoot. As were the venture capitalists, and the guy who runs a tech incubator, and the progressive, studiously “creative” big company.

And the characters were “accurate”, inasmuch as fictional, satirical characters are meant to be. Just as Big Bang ’s Sheldon is instantly recognisable as a certain type of high-functioning geek, but one who has been pushed to hilarious and endearing fictional extremes. I’ve yet to meet an actual Sheldon (more’s the pity).

Which, to his credit, Google’s Eric Schmidt recognised. In the Valley’s micro-furore of the launch, Schmidt admitted he had been to “those” parties. And he appears in a very funny cameo at the Kid Rock event, running away from a pompous angel investor.

There’s a lot to like, laugh at and, yes, wince at in this new series from Mike Judge, the creator of Beavis and Butthead and King of the Hill .

Meanwhile, check out the website for the start-up at the centre of the series: piedpiper.com/#hello.

“Pied Piper is a multi-platform technology based on a proprietary universal compression algorithm that has consistently fielded high Weisman Scores™ that are not merely competitive, but approach the theoretical limit of lossless compression.”

If that doesn’t make you LOL, you deserve to be relentlessly satirised.