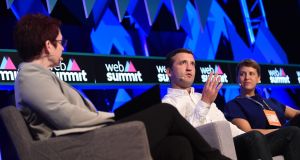 Dr Kathleen Richardson has called for a ban on sex robots. Specifically, the ones that look like humans. They’re already being sold and if the Roxxxy robot is anything to go by current ones look (and work) a bit like blow-up dolls.

Richardson, senior research fellow in the ethics of robotics at De Montfort University, has just launched a campaign in the UK to get humanoid sex robots banned and she is hoping that people will pay attention before the Second International Conference on Love and Sex with Robots takes place in Malaysia later this month.

At Wednesday’s Web Summit she told attendees that sex with robots is “something we need to be worried about”. She added: “If people think they can have an intimate relationship with a machine then it says something about how we view relationships with real people”.

“You can’t have sex with a machine like you do with a human being […]we’re losing our sense of humanity,” she added.

The First Law states that “a robot may not injure a human being or, through inaction, allow a human being to come to harm.” Hunter said that this doesn’t specific whether the harm is physical, emotional or psychological, implying that sex with a robot has the potential to be emotionally or psychologically damaging.

Nell Watson, futurist at Singularity University and co-chair in IA and robotics, had some interesting contrary views on the future of sex robots. Rather than seeing them as a replacement for human contact that was likened by Richardson to prostitution, she thinks there may be a need for them.

“One of the causes of seeking prostitutions is deep seated loneliness. I wonder if one of the great killers of our age isn’t loneliness,” she pondered.

“We can look at whether machines can be a conduit towards not being alone. In China and Korea, chatbots are enormously popular.”

Many people turn these chatbots into virtual romantic companions, forming an emotional connection with them. This idea of companion robots, whether it is virtual or physical, is something Watson is keen to outline. It is the antithesis of Roxxy.

“I’ve seen cases where people have lost their boyfriends and created avatar to embody this relationship and continue it until they are ready to let go.”

Richardson replied that he wasn’t saying we shouldn’t make them but that “we should examine what it means” while MC Andra Keay, managing director of Silicon Valley Robotics, lightened the mood. “A can of WD40 would be a good idea,” she quipped.