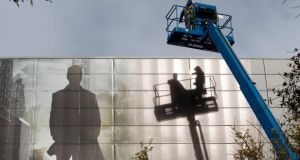 Workers install an advertisement for a new S’UHD TV from Samsung Electronics on the side of the Las Vegas Convention Center in Las Vegas.

First it was ultra high definition TVs, then came the curved TV. Now Samsung has increased the stakes in the TV market, unveiling its new S UHD TV at CES in Las Vegas.

The new TV takes UHD, which has about four times the resolution of the standard high definition TV, to the next level, the company said, promising more depth and better colour.

Describing the new TV as the most cutting edge technology in the history of the TV industry, Samsung co-CEO JK Shin promised the TVs would deliver a whole new level of viewing experience for consumers.

Samsung has been working with studios on the project, linking up with 20th Century Fox to remaster Exodus and Life of Pi for the S UHD TV.

“We are getting an incredible response from powerful directors and producers,” the Samsung CEO said, saying it breathed new life into films.

Although TV manufacturers have been keen to push the new 4K ultra high definition standard, high prices for the new TVs and a lack of readily available content may have dampened consumer enthusiasm.

However, that could be about to change. Samsung has allied itself with major film studios and other TV manufacturers, forming the UHD Alliance. Among the members are studios 20th Century Fox, Warner Bros and Disney, TV makers Sony and Panasonic, and content distributors such as Netflix and DirecTV.

The alliance would also seek to create a UHD ecosystem, Mr Shin said.

“It is our prime responsibility to ensure that customers have the best possible viewing experience,” Mr Shin said. “Together we will establish a premium quality standard for UHD content and UHD devices.”

The company also revealed that its smart TVs will be powered by its open source Tizen software. That means a redesigned user interface and the ability to sync with other devices more easily using Wifi Direct.

The TVs will also search for Samsung devices nearby and connect with them via a Bluetooth connection.

1 Chris Johns: Past is another country when it comes to our post-pandemic future
2 Citigroup warns that markets are out of step with reality
3 ‘The recovery needs to be a full-scale economic renewal’
4 Joint accounts: if one of us dies, can the other access the money?
5 Minister calls on EU to act against tobacco firms ‘undermining’ menthol ban in Ireland
Real news has value SUBSCRIBE