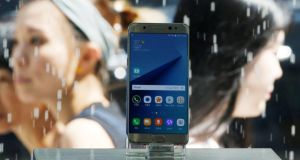 Samsung Electronics is to commence with an exchange programme allowing Irish customers who have bought its Galaxy Note7 device to voluntarily replace it for a new one.

The move comes after the company was forced to halt sales of the device in 10 countries last week after finding problems with the battery cell.

The phone was due to go on sale in Ireland, and across Europe, last Friday and was set to sell from €149 in Ireland.

Samsung said Irish customers who have already obtained the Galaxy Note7 will be contacted by the provider or operator from which they purchased the product shortly with the exchange of units to begin from September 19th.

The company said while there have been only a small number of reported incidents globally, it had identified the affected inventory and stopped sales and shipments of those devices. Samsung said new sales of the Note7 in affected markets would resume after it deals with replacements.

“The safety and satisfaction of customers is our top priority and by working closely with our partners and operators, we are taking a proactive approach to address the needs of Galaxy Note7 customers in the UK and Ireland. We are encouraging customers to exchange their Galaxy Note7 by taking advantage of the product-exchange programme,” said Conor Pierce, vice-president of IT and mobile at Samsung Electronics UK and Ireland.

The scale of the recall is unprecedented for Samsung, which prides itself on its manufacturing prowess. While recalls in the smartphone industry do happen, including for rival Apple, the nature of the problem for the Galaxy Note7 is a serious blow to Samsung’s reputation, analysts said.

1 In this strangest of recessions, what happens next for Ireland?
2 Bank of Ireland sees about 2,000 staff apply for voluntary redundancy
3 Michael O’Leary is the boss you want to lead an airline out of crisis
4 Should I switch bank now with Ulster Bank at risk of closing?
5 EY Entrepreneur of the Year: nominee profiles
Real news has value SUBSCRIBE